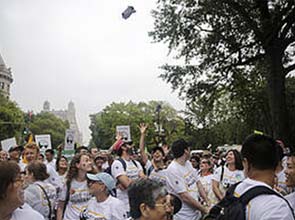 “We said it would take everyone to change everything – and everyone showed up,” said Eddie Bautista, executive director of the New York City Environmental Justice Alliance.

The number of people who joined the People’s Climate March this September 21 reached a record-breaking 310,000.

An official count conducted revealed over 310,000 people who participated at the People’s Climate March in New York City this Sunday – tripling the early estimates of 100,000.

“We said it would take everyone to change everything – and everyone showed up,” said Eddie Bautista, executive director of the New York City Environmental Justice Alliance.

“Our members are marching because climate change affects all of us. We live in the communities that get destroyed by storms like Sandy. We work in the buildings that get flooded. We get hit by health epidemics like asthma that are rampant in our communities, and we care about the world that we will leave our children and grandchildren,” explained Hector Figueroa, president of 32BJ SEIU.

The climate march was done in preparation for the upcoming Climate Summit on September 23.

Frances Beinecke, president of the Natural Resources Defense Council, called for decisive action against climate change as she joined the march.

“After over forty years in the trenches of the environmental movement, I’ve never been more inspired and awe-struck. The energy was electric and the turnout unprecedented. Today proves global support for climate action is undeniable. A swell of humanity has spoken as one: The time to act on climate is now,” she noted.

“This is living proof that climate change is more than an environmental issue – it’s about justice and job creation, our health and communities, and ultimately about our future. We marched in solidarity with people around the world on the frontlines of climate change. And we marched for solutions that will deliver a better life for all,” Ms. Beinecke said.

The World Wide Fund for Nature, under the slogan “Save the Humans,” also participated at the march.

“When international leaders arrive in New York, they will be greeted by the larges, broadest and most diverse climate march in history. Leaders must seize on this rallying cry and find a way to give the people what they want: ‘climate action now,’” said Keya Chatterjee, W.W.F.’s point person for the People’s Climate march and U.S. director of renewable energy outreach. – EcoSeed Staff