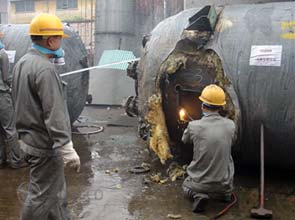 Seen as a major leap forward for the Montreal Protocol, the announcement was made at an event commemorating the International Day for the Preservation of Ozone Layer.

China has taken a big step towards reducing its hydrochlorfluorocarbons by closing down five HCFC production lines.

Seen as a major leap forward for the Montreal Protocol, the announcement was made at an event commemorating the International Day for the Preservation of Ozone Layer.

The Government of China has been working with the World Bank Group since 2013 in phasing out the country’s HCFC production, with the plan of eliminating the country’s production capacity of O.D.S. by 2030. This stage is supported by a US$95 million grant from the Multilateral Fund for the Implementation of the Montreal Protocol, or MLF.

“China is a key player in the Montreal Protocol’s HCFC phase-out objectives. Today’s announced decrease in China’s HCFC production is a major step in the direction of meeting China’s Protocol obligations ahead of schedule,” said Bert Hofman, World Bank Country Director for China.

“It also generates major benefits in the battle against climate change: The reduction equate to taking approximately 19.5 million cars off the roads, or eliminating annual emissions from 24 coal-fired power plants,” Mr. Hofman added.

“As china is the single biggest producer of HCFCs today, such early achievement is laudable. Under its HCFC strategy, China will phase out its HCFC production, contributing not only to protect the ozone layer but also to mitigate climate change because HCFCs are also power greenhouse gases,” said Tina Birmpili, executive secretary of the Ozone Sectretariat of United Nations Environment Program.

“The funds from the MLF will cover the incremental costs of the phase out, but clearly China’s own effort and contribution is the key. China and its people will be putting in a lot of work and effort. China has a unique opportunity to proceed with its production sector project in a mnner that demonstrates leadership in ensuring the success of the Montreal Protocol,” Ms. Birmpili added.

The Government of China and the World Bank’s partnership has now resulted in phasing-out more than 219,000 tons of O.D.S. from various sectors and also resulted on avoided emissions of 855 million tons of carbon dioxide equivalent which compares to eliminating the annual emission of more than 186 passenger vehicles.

It is partnerships such as these that is contributing to the ozone layer’s improvement that is already on its road to recovery (see related story) . – EcoSeed Staff