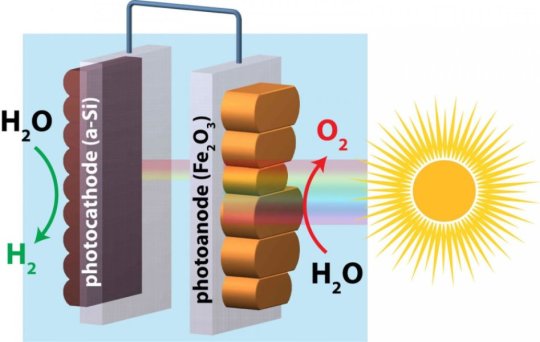 Re-grown hematite proved to be a better power generating anode, producing a record low turn-on voltage that enabled the researchers to be the first to use earth-abundant hematite and silicon as the sole light absorbers in artificial photosynthesis, said Boston College associate professor of chemistry Dunwei Wang, a lead author of the report.

Finding an efficient solar water splitting method to mine electron-rich hydrogen for clean power has been thwarted by the poor performance of hematite. But by ‘re-growing’ the mineral’s surface, a smoother version of hematite doubled electrical yield, opening a new door to energy-harvesting artificial photosynthesis, according to a report published online today in the journal Nature Communications.

Re-grown hematite proved to be a better power generating anode, producing a record low turn-on voltage that enabled the researchers to be the first to use earth-abundant hematite and silicon as the sole light absorbers in artificial photosynthesis, said Boston College associate professor of chemistry Dunwei Wang, a lead author of the report.

The new hydrogen harvesting process achieved an overall efficiency of 0.91 percent, a ‘modest’ mark in and of itself, but the first ‘meaningful efficiency ever measured by hematite and amorphous silicon, two of the most abundant elements on Earth,’ the team reported.

‘By simply smoothing the surface characteristics of hematite, this close cousin of rust can be improved to couple with silicon, which is derived from sand, to achieve complete water splitting for solar hydrogen generation,’ said Wang, whose research focuses on discovering new methods to generate clean energy. ‘This unassisted water splitting, which is very rare, does not require expensive or scarce resources.’

Wang said the findings represent an important step toward realizing the potential performance theoretical models have predicted for hematite, an iron oxide similar to rust.

‘This offers new hope that efficient and inexpensive solar fuel production by readily available natural resources is within reach,’ said Wang. ‘Getting there will contribute to a sustainable future powered by renewable energy.’

The team, which included researchers from Boston College, UC Berkeley and China’s University of Science and Technology, decided to focus on hematite’s surface imperfections, which have been found in earlier studies to limit ‘turn-on’ voltage required to jump-start photoelectrochemistry, the central process behind using artificial photosynthesis to capture and store solar energy in hydrogen gas.

The team re-evaluated hematite surface features using a synchrotron particle accelerator at the Lawrence Berkeley National Laboratory. They established a new ‘re-growth’ strategy that applied an acidic solution to the material under intense heat, a process that simultaneously reduced ridges and filled depressions, smoothing the surface.

Tests immediately showed an improvement in turn-on voltage, as well as an increase in photovoltage from 0.24 volts to 0.80 volts, a dramatic increase in power generation.

The team reported that further modifications to the new hematite-silicon method make it amenable to large-scale utilization. Furthermore, the ‘re-growth’ technique may be applicable to other materials under study for additional breakthroughs in artificial photosynthesis.

‘It is a delight to see that a simple re-growth treatment can do so much to improve the performance of hematite,’ said Wang. ‘Due to its prior poor performance, hematite has been pronounced ‘dead’ by many leading researchers in the field. We are happy to show that much can be harvested from this earth abundant, non-toxic material.’