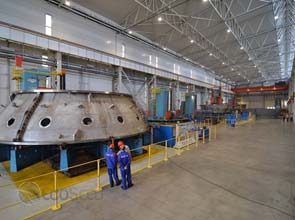 Alstom Power has inaugurated its new hydropower manufacturing facility in Tianjin, China worth 1 billion Chinese yuan ($150.56 million), which will strengthen its position in the country’s burgeoning hydropower industry.

The new facility will have 20 percent higher production capacity, capable of producing up to 30 turbine and generator units annually between 20 megawatts to 1,000 MW.

“Alstom Hydro China places us in a great position to respond to demand and execute our order backlog in the Asian region, as well as having an eco-friendly design. Its new location in the TAEZ industrial zone near Tianjin Airport provides us a lot of room for potential further expansion,” said Philippine Joubert, president of Alstom Power.

The facility also utilizes rainwater recycling and photovoltaic panels that supply electricity for heating, cooling, lighting and ventilation, as well as skylights to maximize the use of natural light.

Alstom revealed on the same day of the facility’s inauguration that Alstom Hydro China will manufacture and deliver equipments to Jiangxi Province Water Control Project headquarters under a 50 million euro ($68.76 million) contract.

The contract includes the delivery of five units of 40 MW bulb turbine and generator units to a new Xiajiang hydropower station under construction on the Ganjiang River, which is expected to go online by 2013.

Switzerland-based Alstom Power is one of China’s top hydropower generators with over 43 gigawatts of contracts for hydro turbine and generators, 28 GW of which are already in commercial operation.

The Three Gorges Dam, the world’s largest power plant, acquired 14 of its 32 units from Alstom Power, each with an output of 700 MW. Alstom Power’s recent hydro projects in China comprise the delivery of four 600 MW units and four 800 MW units for the Li Yuan and Xiangjiaba hydro projects, respectively.

The company claimed that the 800 MW turbines designed for Xiangjiaba are currently the world’s largest hydro turbines ever manufactured.

China sources 22 percent of its total electricity generation from its hydropower industry, which is increasing at a rate of 15 GW every year. The country has over 110 new hydro projects in the planning stage to be completed by 2020.

Upon completion, these hydro plants are expected to boost the country’s power by 200 GW and contribute 28 percent of installed capacity.