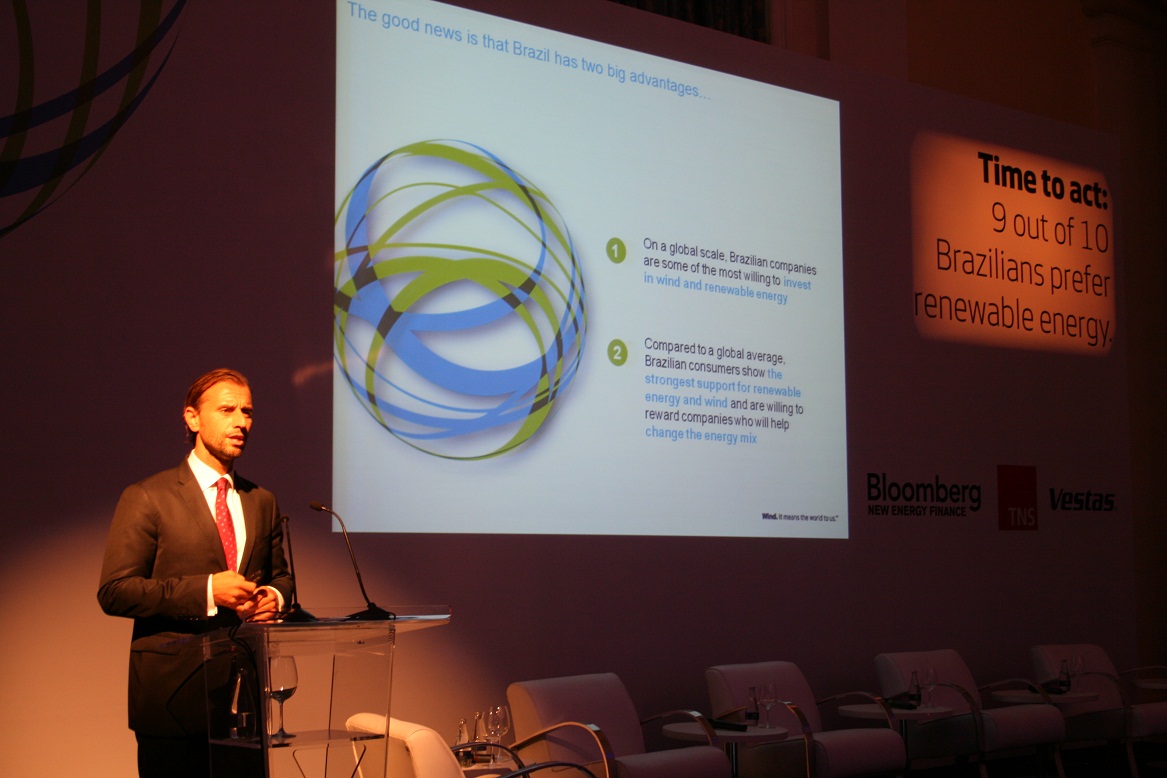 This global initiative is based on two key pillars: the Global Consumer Wind Study 2012 (GCWS), an annual survey made about consumers’ preferences for renewable energy

In the context of the 3rd edition of Brazil Windpower conference and trade fair, Vestas, the world leader in wind technology, launched yesterday, 29th August 2012, in Brazil the Energy Transparency Campaign 2012. This campaign is aimed at increasing energy transparency among consumers around the world and influencing companies’ energy procurement, whilst at the same time helping to shape the future energy agenda in Brazil and other markets.

This global initiative is based on two key pillars: the Global Consumer Wind Study 2012 (GCWS), an annual survey made about consumers’ preferences for renewable energy, and the Global Renewable Energy Index Report 2012 (CREX), an index of companies that use renewable energy voluntarily, prepared by Bloomberg New Energy Finance.

The launch took place at an event in Rio de Janeiro, where the conclusions of the two studies were presented to 200 high-level representatives from different key stakeholder groups. These included politicians, financiers, consultants and high-profile Brazilian companies from a diverse range of sectors like consumer goods, automotive, steel and energy, including Petrobas, Vale and Galvao, among others.

Both studies provide powerful global facts which can directly influence the world’s future energy direction. The GCWS 2012 presents eye-opening facts about Brazilian consumers’ lack of information about the type of energy used by their preferred brands, their preferences for renewable energy and their willingness to pay more for products made with renewable energy:

The CREX 2012 reveals that ‘saving costs’ and/or ‘generating financial returns’ are some of the most commonly stated reasons for Brazilian companies to invest in renewable energy.  In the survey, over half of the Brazilian CREX companies said that their investments in renewable energy were based on pure economic reasoning. Some of these companies are national flagships such as Duratex, Klabin and Grupo Pão de Açucar. According to the CREX, in 2011 they sourced 79%, 57% and 28% of their total electricity consumption from renewable energy, respectively.

For energy intensive companies, volatile energy prices are an increasing risk. Even though Brazil is less dependent on importing fossil fuels than other countries, electricity prices are expected to increase in the country, primarily due to the rapidly increasing demand.

According to the state-run Energy Research Corporation (EPE), electricity consumption in Brazil will grow at an average rate of 4.5 per cent annually over the next ten years. Thus, the total electricity demand in 2021 is estimated to be 736,000 GWh, 56% higher than in 2011, when the demand was 472,000 GWh. So, for cost-conscious companies, renewable energy and wind, in particular, provide a strong business case.

Morten Albæk, Global SVP, MarCom & Corporate Relations, a keynote speaker at the Rio event declared: ”Although faced with increasing energy demand and growing CO2 emissions, Brazilian companies deserve a lot of credit for being at the forefront when it comes to investing in wind and renewable energy. The same goes for the Brazilian consumers, as they show the strongest support for renewable energy and wind on a global scale. This event has contributed to position Vestas as the leading player in the environmental sweet spot.“

The presentation of both studies was followed by a round table discussion where key speakers including Mauricio Tolmasquin, President of Energy Research Office, and Elbia Melo, President of the Brazilian Wind Energy Association, gave their perspective on how the data from the studies was extremely valuable to influence private investment, corporate expansion plans and the regulatory framework.

“This type of event is exactly the type of initiative we needed today in order to emphasize Vestas’ commitment to the Brazilian market. Hosting this global launch event as an opening to Brazil Windpower 2012 allows us to step in the conference program with facts that will bring a new perspective to the energy debate in Brazil,” said Miguel Picardo General Manager, Vestas Brazil.

This episode does not stand alone. The next Energy Transparency 2012 event will take place in London in September, and it will be followed by four additional events in New York, Frankfurt, Mumbai and Sydney. The launch in Brazil represents an important first step in an ambitious campaign aimed at reaching top brands and companies to further explore the economic, social and branding benefits that wind can bring to them. For more information, please visit: http://www.energytransparency.com/