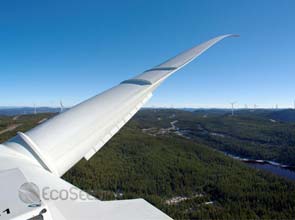 The company signed contracts for 27 projects in Quebec and Ontario in 2014. This represents 454 megawatts of wind and 134 megawatts of solar power in Canada.

EDF Renewable Services expanded their portfolio of renewable energy projects in Canada by 52 percent in 2014.

The company signed contracts for 27 projects in Quebec and Ontario in 2014. This represents 454 megawatts of wind and 134 megawatts of solar power in Canada.

“We are pleased to continue expanding our depth of experience and presence in Canada, to assist our customers in achieving operational excellence. From full O&M agreements, to customized monitoring, engineering support, SCADA solutions, balance-of-plant, and more, we leverage our more than 25 years of O&M expertise to optimize project availability and maximize profitability,” said Dalen Copeland, director of Business Development.

EDF Renewable Services is U.S. subsidiary of EDF Energies Nouvelles. It currently operates a total of over 8.5 gigawatts of wind, solar and biomass projects throughout the U.S., Canada, and Mexico.

One of the latest projects by EDF EN Canada is the Rivière-du-Moulin wind power project located in the unorganized territory (U.T.) of Lac-Pikauba in the Regional County Municipalities (R.C.M.) of Charlevoix and the UT of Lac-Ministuk in the RCM of Fjord-du–Saguenay.

The Rivière-du-Moulin Wind Project will be the largest wind energy facility in Canada at 350 MW total under a single Power Purchase Agreement.

The wind power project is being developed in two phases, with the first phase (150 MW) reaching commissioning on November 27, 2014. The second phase (200 MW) is scheduled for commissioning by December 2015.

“Of the seven wind farms that make up the EDF EN Canada wind portfolio in Quebec, Rivière-du-Moulin is our largest project and the sixth to be commissioned,” said Al Kurzenhauser, chief operating officer for EDF EN Canada.

The project was awarded to EDF EN Canada in 2008 and 2010 through Hydro-Quebec Distribution call for tenders. Other projects awarded in the same time period were the 74 MW Mont-Rothery, which commenced construction in November (see related story), the 24.6 MW Le Granit Wind project which began commercial operations last month (see related story). – EcoSeed staff