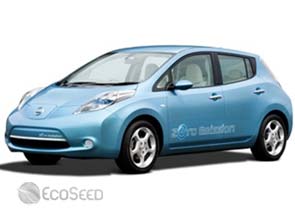 Global sales of electric vehicles are set to rise this year due to worries about security of oil supply, the environment and fuel costs, British consultancy J.D. Power said on Friday.

Global sales of electric cars are expected to reach 940,000 units this year compared with 732,000 units last year, with the number jumping to three million in 2015, J.D. Power analysts said in a report.

The uptake of battery powered cars is seen as key to fighting climate change by cutting carbon emissions, as well as a way to wean economies off imported or difficult to reach oil, as highlighted by BP’s Gulf of Mexico oil spill.

More than 98 percent of sales are expected to be of hybrid electric cars, which are part petrol, part battery, rather than plug-in cars, which are wholly battery powered and need to be charged from a power point.

J.D. Power also said it expected the United States to account for 55 percent of the hybrid market by 2015, followed by Asia with most of the sales in Japan.

«We think Asia as a whole will account for about 30 percent of global hybrid sales in 2015, with Japan’s volume at nearly 750,000 units, or about 25 percent of the global hybrid market,» it said.

In the smaller plug-in market, sales were forecast to be 23,000 this year, rising to 500,000 by 2015, but growth would be hampered by high vehicle costs and poor driving ranges compared with hybrids.

«The (plug-in) Nissan Leaf and the Tesla Roadster have a driving range of 100 miles to 250 miles, depending on the size of the battery, whereas a (hybrid) Toyota Prius can go 600 miles,» it said.

«We think sales of cars powered by fuel cells will remain below 20,000 units per year for the next 10 years. The technology is currently too expensive, and this isn’t likely to change soon,» the report said.