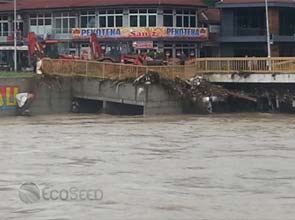 W.M.O. confirmed the findings as it explained that 2014 ranked as the “hottest year on record” and is part of a larger climate trend.

The United Nations World Meteorological Organization confirmed that global warming will cause devastating weather patterns and increasing temperatures which will last into the foreseeable future.

W.M.O. confirmed the findings as it explained that 2014 ranked as the “hottest year on record” and is part of a larger climate trend.

“The overall warming trend is more important than the ranking of an individual year. Analysis of the datasets indicates that 2014 was nominally the warmest on record, although there is very little difference between the three hottest years,” W.M.O. Secretary-General Michel Jarraud explained.

Findings show that around 93 percent of the excess energy trapped in the atmosphere by greenhouse gases from fossil fuels and other human activities end up in the ocean, resulting in global sea-surface temperatures reaching “record levels” in 2014.

The high sea temperatures, the U.N. agency said, have contributed to exceptionally heavy rainfall and floods in many countries and extreme drought in others.

Various extreme weather episodes such as the 12 major Atlantic storms which battered the United Kingdom; floods that ravaged the Balkans; above normal monthly precipitation over the Pacific side of western Japan; crippling droughts in the United States; and severe droughts in Northeast China are consistent with the expectations of a changing climate, Mr. Jarraud pointed out. – EcoSeed Staff