Britain’s C.C.S. market could top £10 billion thanks to island inlet 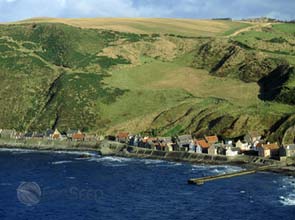 Research body Scottish Carbon Capture and Storage said carbon dioxide could be stored in Captain Sandstone, a rock formation made up of tiny grains of sand buried more than half a mile under the sea floor in the Moray Firth.

The site the group studied is one of a number of sandstone rock formations that are filled with salt water, called saline aquifers, which makes up 95 percent of the potential carbon dioxide storage capacity in the North Sea.

«We have shown that this is a feasible site that could store massive amounts of carbon dioxide, helping Britain meet its targets for carbon emissions reduction. The future potential for this and other areas of the North Sea is immense,» Professor Eric Mackay from Scottish Carbon Capture.

The results are significant given that proponents of 14 British carbon capture and storage and renewable energy projects have applied for European Union funding of around 4.5 billion euros ($6.3 billion) last month. Seven of these carbon capture projects are for coal-fired power stations and two are for gas power plants.

The report, entitled “Progressing Scotland’s CO2 Storage Opportunities” predicted that the industry could grow to support 13,000 jobs in Scotland and another 14,000 elsewhere in Britain by 2020.

Jim Mather, Scotland’s energy minister, said the country will have to move quickly if it is to capitalize on the economic opportunities of carbon capture and storage.

“This latest research further strengthens Scotland’s position as the number one location for C.C.S. technology development and deployment in the world,” Mr. Mather said.

Meanwhile, Scottish Carbon Capture showed that this opportunity could be best developed if provided with adequate support.

Mr. Mather urged the government to back ScottishPower’s Longannet project, the only remaining contender in the government’s own £1-billion C.C.S. funding program, which aims to finance the first commercial-scale carbon capture project in the country and three more projects of the same scale.

In May 2009, ScottishPower and Norway’s Aker Clean Carbon flicked the switch on a prototype plant over the 2.3-gigawatt Longannet coal-fired plant in Fife, the first of its kind in the country. Longannet is Britain’s second-Largest coal-fired power station and Europe’s third-largest.