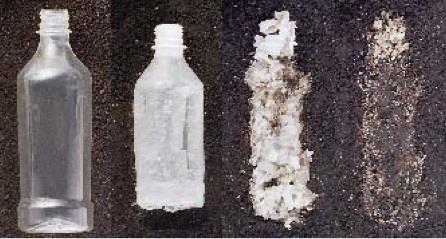 The bioplastic PLA is derived from renewable resources, including the sugar in maize and sugarcane. Fermentation turns the sugar into lactic acid, which in turn is a building block for polylactic acid.

Biodegradable drinking cups or vegetable wrapping foil: the bioplastic known as polylactic acid (PLA) is already a part of our everyday lives. And yet, PLA is not yet considered a full alternative to traditional petroleum-based plastics, as it is costly to produce. Researchers from the KU Leuven Centre for Surface Chemistry and Catalysis now present a way to make the PLA production process more simple and waste-free. Their findings were published in Science.

The bioplastic PLA is derived from renewable resources, including the sugar in maize and sugarcane. Fermentation turns the sugar into lactic acid, which in turn is a building block for polylactic acid. PLA degrades after a number of years in certain environments. If it is collected and sorted correctly, it is both industrially compostable and recyclable. In addition, PLA is biocompatible and thus suitable for medical use, for instance in absorbable suture threads. PLA is also one of the few plastics that are suitable for 3D printing.

However, PLA is not yet a full alternative for petroleum-based plastics due to its cost. The production process for PLA is expensive because of the intermediary steps. «First, lactic acid is fed into a reactor and converted into a type of pre-plastic under high temperature and in a vacuum,» Professor Bert Sels explains. «This is an expensive process. The pre-plastic — a low-quality plastic — is then broken down into building blocks for PLA. In other words, you are first producing an inferior plastic before you end up with a high-quality plastic. And even though PLA is considered a green plastic, the various intermediary steps in the production process still require metals and produce waste.»

The KU Leuven researchers developed a new technique. «We have applied a petrochemical concept to biomass,» says postdoctoral researcher Michiel Dusselier. «We speed up and guide the chemical process in the reactor with a zeolite as a catalyst. Zeolites are porous minerals. By selecting a specific type on the basis of its pore shape, we were able to convert lactic acid directly into the building blocks for PLA without making the larger by-products that do not fit into the zeolite pores. Our new method has several advantages compared to the traditional technique: we produce more PLA with less waste and without using metals. In addition, the production process is cheaper, because we can skip a step.»

Professor Sels is confident that the new technology will soon take hold. «The KU Leuven patent on our discovery was recently sold to a chemical company that intends to apply the production process on an industrial scale. Of course, PLA will never fully replace petroleum-based plastics. For one thing, some objects, such as toilet drain pipes, are not meant to be biodegradable. And it is not our intention to promote disposable plastic. But products made of PLA can now become cheaper and greener. Our method is a great example of how the chemical industry and biotechnology can join forces.»