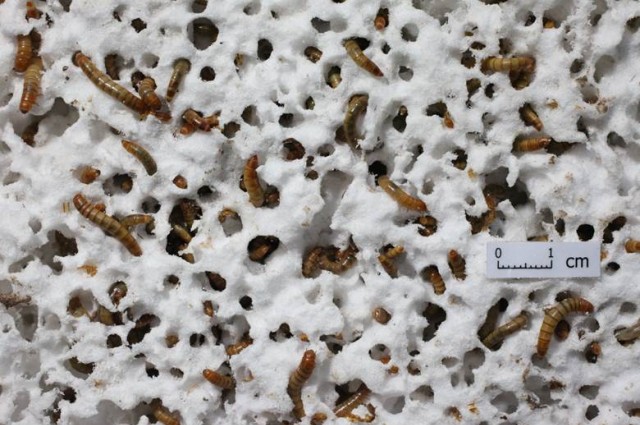 ”Theres a possibility of really important research coming out of bizarre places,» said Craig Criddle, a Stanford professor who supervises plastics research, in a statement. «Sometimes, science surprises us. This is a shock.”

Mealworms could be the natural trash-disposers we need to battle the scourge of plastic polluting our planet. The study, published in Environmental Science and Technology, is the first to provide in-depth evidence for how these pudgy little bugs can survive munching on a diet of Styrofoam and other typesof polystyreneplastic, whichaggregate in landfills and werepreviously considered non-biodegradable.

”There’s a possibility of really important research coming out of bizarre places,» said Craig Criddle, a Stanford professor who supervises plastics research, in a statement. «Sometimes, science surprises us. This is a shock.”

For the study, the scientists fed 100 mealworms 34-39 milligrams of Styrofoam–the equivalent of a small pill-sized dose of Styrofoam a day. With the assistance of gut microbes, theworms converted half of this plastic into carbon dioxide and thenexcreted the rest in the form of biodegradable droppings.

But what took the scientists most by surprise was the worms’ follow-up health report: The Styrofoam-fed mealworms appearto be just as healthy as those fed a normal diet. In fact, their excreted waste seems to be safe enough to be used as soil forcrops, although more research is needed to confirm this.

The real breakthrough in this study is the discovery bugguts can break down what was believedto be a non-biodegradable product–especially one as ubiquitous and problematic for our environment as polystyrenes.

If the researchers can pinpoint the exact microorganismsresponsible forthis incredible feat, they may be able to replicate the process and engineer more efficient and powerful digestive enzymes.

As research engineer Wei-Min Wu from Stanford University said: «Our findings have opened a new door to solve the global plastic pollution problem.”

In the U.S. alone, more than 33 million tons of plastic get dumped into landfills each year, and less than 10% of that waste is recycled. The plastic can then pollute soils and waters, threaten marine ecosystems, and polystyrene foams like Styrofoam can takemore than amillionyears to decompose, according to the EPA.

The team next plans to explore what happens when Styrofoam-munching mealworms are consumed by other animals, who are in turn eaten by even larger creatures, to see what the effect might be on food chains.They are also hopeful that they can finda marine equivalent to mealworms that could be the defenders theEarth’s oceans need by digesting plastic that typically finds its way into the guts of seabirds, turtles and fish–all of whom do not respond as warmly as mealworms to the plastic in their intestines.

From a non-sustainable, non-renewable, polluting material to an edible treat for a hungry tummy, this research definitely proves one man’s trash is another’s delectable delight.