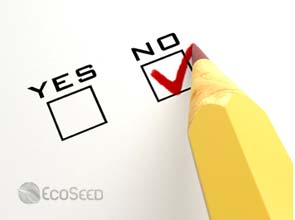 The proposition would put on hold a state renewable energy target, a market for rights to trade greenhouse gases and many other steps adopted under the state’s Assembly Bill 32 climate change law. Its fate is seen as key for California’s green business climate and a bellwether for the United States.

The Public Policy Institute of California poll found 48 percent of likely voters oppose Proposition 23 and 37 percent support it. Some 15 percent did not know.

A Reuters/Ipsos poll last week showed similar numbers with a slightly higher percentage of undecided. The Reuters/Ipsos poll found 46 percent against the measure, 35 percent in favor, and 19 percent undecided ahead of the November 2 vote. A Field poll has shown similar results.

While Californians are known for their environmental leanings, the early campaign was dominated by business interests.

Contributions from both sides have topped $33 million, with oil companies backing Proposition 23 and venture capitalists who fund alternative energy companies against it.

The $8 million surge against Proposition 23 in the latest week took the «No» campaign above $24 million, with donations by environmentalists and technology executives standing out.

Total «Yes» contributions top $9 million, led by oil companies including Tesoro Corporation, Valero Energy Corporation and Koch Industries’ Flint Hills Resources. The «Yes» contribution total has not changed much in the last week, and the campaign indicated disappointment with the poll results.

«The poll is testimony to what can happen when billionaire hedge fund managers and venture capitalists decide it’s more in their self-interest to invest in defeating an initiative that would pull the plug on subsidies and incentives for ‘green tech’ than to invest in the green tech sector itself,» the «Yes on 23» campaign said in a statement.

«They are already investing in it elsewhere in the world in places without global warming laws nearly as stringent as California’s,» it continued.

Proposition 23 would suspend the climate change law, until double-digit unemployment falls to 5.5 percent or less for four straight quarters. Proponents see it halting a dangerous rise in energy costs while opponents expect the proposition would gut the state’s green business industries.