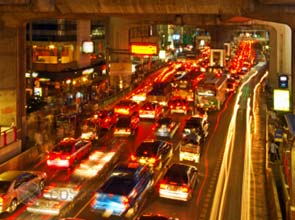 Urban traffic forces a vehicle to frequently shift from acceleration and deceleration. As a vehicle decelerates, some force is wasted as kinetic energy when the brakes are applied and the subsequent friction generates heat.

Existing electric vehicles and electric hybrid vehicles are capable of harnessing this energy to power a generator that recharges the batteries.

However, the sophisticated technologies that enable these vehicles to collect and store kinetic energy can ratchet the overall price of electric vehicles upward.

Per Tunestål, who is researching combustion engines at Lund University, believes there is a cheaper alternative to electric vehicles – pneumatic hybrids.

In their pneumatic hybrid system, the engine is used as a two-stroke compressor for generating compressed air during vehicle deceleration and acceleration.

During deceleration, the engine engages in compressor mode and stores compressed air in a pressure tank connected to one of the engine’s inlet ports.

As the vehicle accelerates, the engine switches to air engine mode and functions as an air-motor driven by the stored pressurized air.

The engines were equipped with pneumatic valve actuators that channel the compressed air to drive the valves. The motion of the valves is managed by a combination of electronic and hydraulic applications.

Results of the study indicate the technology is particularly feasible for jerky and slow driving, especially for buses in urban traffic. Moreover, the scientists believe commercializing the technology would be much easier as pneumatic hybrids are much cheaper to manufacture.

Constructing a pneumatic hybrid system does not incorporate expensive materials and it takes less space than an electric hybrid engine. Moreover, it can be applied with petrol, natural gas and diesel engines.

Sasa Trajkovic, a doctoral student in combustion engines at the university, calculated that buses in cities could reduce their fuel intake by 60 percent if fitted with pneumatic hybrid systems.

He also concluded 48 percent of the brake energy can be compressed and stored in a small tank connected to the engine to be used later. This degree of reuse for pneumatic hybrids is supposedly at par with current electric hybrids.

“The technology is fully realistic. I was recently contacted by a vehicle manufacturer in India which wanted to start making air hybrids,” said Mr. Tunestål.

American automaker Ford first came up with the concept of pneumatic hybrids in the 1990’s, but the company dropped plans to develop it because of the absence of advanced technologies.

Numerous technological institutes are now performing research on pneumatic hybrid systems including the Swiss Federal Institute of Technology in Zurich.