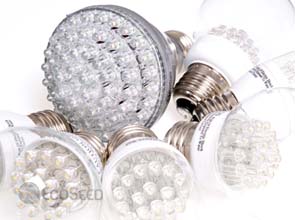 Light-emitting diodes, otherwise known as L.E.D.’s, are considered as the next step in lighting development. But Oladele Ogunseitan, chair of the university’s department of Population Health & Disease Prevention, and his fellow scientists have discovered substances in L.E.D.’s which can be harmful to humans.

The scientists crushed, leached and measured different types of L.E.D. lights including those sold in Christmas strands, traffic lights and automobile headlights and brake lights.

They found low-intensity red lights to contain up to eight times the volume of lead allowed under California law. White bulbs, on the other hand, held the least amount of lead but had elevated levels of nickel.

High-intensity lights have been found to display considerable cancer and non-cancer potentials due to the prohibitive levels of arsenic and lead found in them. These lights are commonly applied as the multi-colored holiday lights used during Christmas.

Lead, arsenic and some other metals found in the bulbs or their related parts have been linked to different diseases. These include various cancers, neurological damage, kidney disease, hypertension and skin rashes.

According to Mr. Ogunseitan, L.E.D. lights are an example of the need to implement product replacement testing.

These lighting alternatives are widely believed to be a safer commodity than compact fluorescent bulbs, which contain mercury. But Mr. Ogunseitan claims these were not properly evaluated for potential environmental health impacts.

He believes manufacturers of L.E.D.’s can minimize the chemical concentrations within their products or redesign these using genuinely safer materials.

“Every day we don’t have a law that says you cannot replace an unsafe product with another unsafe product, we’re putting people’s lives at risk,” said Mr. Ogunseitan.

“As we try to find better products that do not deplete energy resources or contribute to global warming, we have to be vigilant about the toxicity hazards of those marketed as replacements,” he concluded.