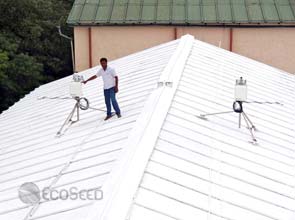 Temperatures in cities and other urban areas often register as higher than those of surrounding rural areas. This is because cities tend to suffer from the «urban heat island effect,» when roofs and pavements absorb and retain the heat of the sun, raising the surrounding area’s temperature.

The «urban heat island effect» can increase energy use in the surrounding areas as cooling systems are then needed to combat the rising temperatures.

Cool roofs are a simple yet effective way of combating this problem. Cool roofs strongly reflect sunlight and reduce heat transfer into the building which can lead to a decrease in energy use – and getting a cool roof can be as easy as painting your roof white.

A white or colorless object has the ability to reflect heat and whitewashed roof and buildings can deflect the sun’s rays and help cool the surrounding area.

A previous study by the Berkeley lab in 2010, based on a global land surface model found that deploying cool roofs and pavements in cities around the world could offset 57 gigatons of carbon dioxide, just by cooling the surrounding areas.

The yearlong project, which will be undertaken in northern India, will be the first to take physical measurements to characterize the cooling and climate effects of white roofs.

«As we talk about policies that would make cool roofs an important climate mitigation measure all across the world, we want to know how things change in a country like India, which has more pollution,» said Mr. Menon.

Instrumentation to measure the reflected light and radiated heat from buildings with untreated or un-whitewashed roofs and treated roofs were set up in roofs on two locations: Nainital, an unpolluted town located outside New Delhi and at Pantnagar, an industrial town less than two hours from Nainital.

The scientists will also be conducting a climate study at the location, measuring temperature, cloud cover and heat fluxes as well as the density and types of atmospheric pollutants in the area.

All this data will then be plugged into a radiative transfer model to predict how much heat from the roof tops is reflected back into the atmosphere. This will allow then to better calculate the impact on warming.

«Once we understand how a polluted atmosphere impacts the effect of cool roofs on CO2-related warming, we’ll know where it makes sense to deploy them. In some parts of the country you may not see a direct impact, but in other parts, because of changes in clouds or an increase in pollutants, cooling may be reduced,» Mr. Menon said.

The current project in India has backing from both the D.O.E. Office of Science and the D.O.E, Office of Energy Efficiency and Renewable Energy.