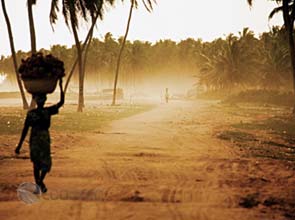 “Many governments are allocating, to various degrees, portions of their fiscal stimulus to green economic sectors such as renewable energies and energy efficiency improvements, sustainable agriculture, and better management of water and waste,” it said.

At the latest session of the African Ministerial Conference on the Environment, South Africa, Kenya, Rwanda and Uganda each drew out the low-carbon initiatives they have undertaken.

Following South Africa’s green economy summit in May, development of the country’s Green Economy Plan is in full swing. The plan covers all the aspects of a low-carbon growth economic path.

The country recently launched a stimulus fund amounting to $7.5 billion for 2009 to 2011 of which almost $1 billion is intended for railways, energy-efficient buildings and water and waste management.

Kenya is near to deploying $100 million to restore the Mau Forest. The 400,000-hectare forest complex is the country’s biggest closed canopy forest ecosystem. Stretching across the Rift Valley of Kenya, it serves as a huge carbon sink absorbing carbon dioxide.

Kenya plans to become a green economy by 2017 and has started with a campaign allotting $1 billion to install a 280-megawatt geothermal energy facility. It has also vowed to revitalize the country’s forest cover to 10 percent by the end of the decade. Kenya has about 1.17 million hectares of indigenous forest for conservation.

Both Uganda and Rwanda have also intensified their green development efforts. Uganda is striving to completely turn to organic farming, being among the least users of non-organic fertilizers globally. Currently, the country uses an average of 1 kilogram of artificial fertilizer for each hectare of agricultural land. This is considerably lower than the already miniscule 9 kilogram per hectare average around sub-Saharan Africa.

On the other hand, Rwanda is taking up steps to restore its forest ecosystems. President Paul Kagame’s vision for the country by 2020 reportedly prominently features environmental protection as a means to generate income.