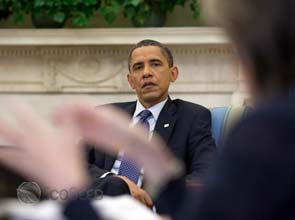 Mr. Obama pointed out that a paradigm shift to a clean energy economy will require intensified legislative action in order to succeed. He emphasized that the application of a carbon pricing mechanism on American companies remains the most effective way to initiate the transition.

Companies should be responsible for their environmental impact and contribution to climate change, he said.

The White House is a staunch supporter of the cap-and-trade scheme, where a carbon ceiling is implemented to limit the amount of carbon dioxide companies emit annually. Companies that fail to keep their annual carbon emissions under the ceiling would be required to buy emission allowances from those who succeed in doing so.

Sherrod Brown, state senator for Ohio, claimed that there was a broad agreement among government officials that the United States must transform its energy system. He expressed support for the deployment of clean energy across the country, noting its importance in the manufacturing sector.

«With the right policies, clean energy will help revitalize American manufacturing. We must ensure that domestic manufacturers have the resources they need to make the United States a global leader in clean energy manufacturing,» he continued.

But not all lawmakers completely agree with the terms of the American Power Act, the new climate and energy bill proposed by Senators John Kerry and Joseph Lieberman. The bill aims to set a national greenhouse gas emission target of 17 percent by 2020 and 83 percent by 2050 based on 2005 levels.

The bill’s authors have until the middle of the year to push the passage of the climate bill in the Senate.

“It sounds good, but, more than half the states have already adopted some version of these renewable electricity standards and they haven’t accomplished much,” he said.

“Solar, wind and biomass are important supplements, but America’s 21st century reliable, low-cost energy needs are not going to be met by electricity produced by a windmill, a controlled bonfire and a few solar panels,” he added.

Mr. Alexander also believes that subsidies for renewable energy projects will be a big burden for American taxpayers. If the country sources 20 percent of its electricity from wind, taxpayers would have to pay $170 billion to subsidize wind energy projects, he predicted.