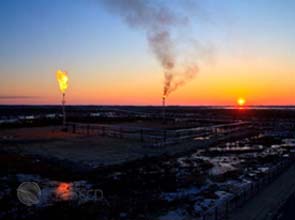 Flare gas are waste gases from oil exploration usually burned in order to avoid unexpected explosions. It contains volatile components, such as methane, ethane and propane which can be used when raw flare gas is refined.

The project at the Yety-Purovskoe oilfield is said to have already saved 290,000 tons of saleable emission credits between August and December 2009 from recovering flare gas.

The companies are expecting around 3.1 million tons of carbon equivalents from the project from 2009 to 2012.

The flare gas recovery project is under the United Nations-backed Joint Implementation offsetting scheme which allows companies to invest in carbon-cutting projects in industrialized countries signed up to the Kyoto Protocol in return for emission credits.

The credits can be used to meet emissions targets established by Kyoto or sold through the carbon market for profit.

Around 400 projects were said to be already registered or currently in development, generating potential offsets of 400 million tons of carbon dioxide equivalent emission by the end of 2012.

In related news, the United Nations approved its first joint implementation project in the country to a combined cycle gas turbine power plant from E.ON A.G., Germany’s biggest utility in October last year. The 400-megawatt facility was built on Shaturskaya power plant near Moscow, expected to save over a million tons of carbon by 2012.