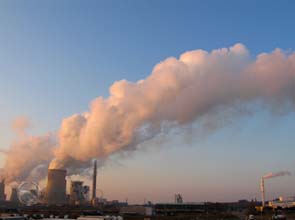 The European Union emissions trading scheme caps the emissions of about 12,600 installations, including power plants, factories and oil refiners, and the European Commission publishes emissions data in April of each year.

Analysts already estimate, based on industrial output data, that emissions rose last year by 2-4 percent, compared with a drop of nearly 12 percent in 2009.

«It was a mixed year with some industrial output going up, others down, and not a huge improvement in power demand across the bloc as a whole,» said Barclays Capital analyst Trevor Sikorski, who estimated carbon emissions were up 4 percent.

The scheme accounts for about 40 percent of total European Union greenhouse gas emissions.

The European Commission, which oversees the scheme, is under pressure to trim a glut of emissions permits, and has already limited how far polluters can offset their emissions by buying carbon credits from outside the European Union from 2013.

The European Union as a whole is split on whether to adopt a tougher target to cut total greenhouse gas emissions by 2020. Some governments want a 30 percent cut, more than the present 20 percent goal, fearing the bloc is slipping behind in a global clean technology race.

Within that big picture there were some falls: cement production was down in the first 11 months of the year, and so was oil refining.

Outside the emissions trading scheme, a slowdown in oil refining suggested that carbon emissions from transport may have fell, while two successive cold winters would have led homeowners to burn more gas and other fuel.

In 2009, European Union E.T.S. emissions were 1.873 billion metric tons of carbon dioxide, down 11.6 percent as a result of the financial crisis.