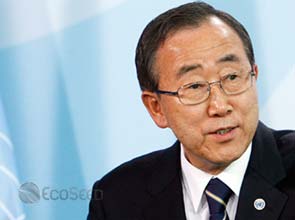 United Nations Secretary-General Ban Ki-moon urges the international community to continue its efforts towards preserving the world’s ozone layer amidst the success of the Montreal Protocol.

In his message, Mr. Ban expressed that he hopes that the success of the Montreal Protocol will inform and inspire the international community in charting a new vision and responsive framework for the period of 2015, which is the deadline for achieving the Millennium Development goals.

With the Montreal Protocol successfully reducing ozone-depleting gases, the U.N. secretary-general commended all the nations who made the protocol an outstanding example of international cooperation.

“I urge governments, industry, civil society and all other partners to apply the same spirit to the other great environmental and development challenges of our times,” said Mr. Ban.

The Montreal Protocol, which was signed on September 16, 1987, aims to protect the ozone layer by taking measures to control the total global production and consumption of substances that deplete it, with the ultimate goal of totally eliminating these substances. – EcoSeed Staff