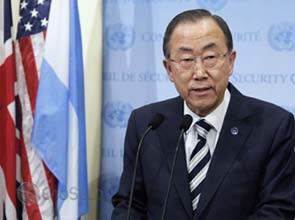 Specifically, Mr. Ban called for financial investments in the field of technology, policies, and practices that will help combat climate change, stressing that the time left to address the global threat is running out. The comments were made during the annual meeting of the International Development Finance Club in Washington, D.C.

“Climate change is the single greatest threat to sustainable development. Yet too often, one important fact gets lost amid the fear: addressing climate change is one of our greatest opportunities,” Mr. Ban said.

“With enlightened action, we can create jobs, improve public health and protect the environment,” he added.

The secretary-general highlighted the role that the development finance community and the financial sector have in forging solutions to climate change. For example, large amounts of capital are needed to develop low-carbon infrastructure, and green enterprises need investments to close the gap between low-emissions and fossil-fueled based projects.

“Our goal is mobilize political will for the negotiations, deliver concrete new commitments and spark a race to the top in climate action. I hope you will collectively use the 2014 Climate Summit to reach the goal of $100 billion-a-year for new climate finance commitments. I also encourage you to double your portfolio of adaptation financing,” Mr. Ban stated.

Development banks, Mr. Ban pointed out, also have a key role in combating climate change as any action from them would not just help make economies and financial institutions more climate-resilient, but it would also inspire other financial actors to follow suit.