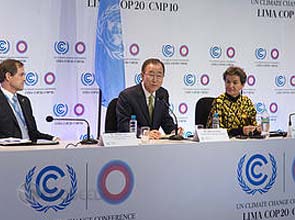 “The more we delay, the more we will pay,” Mr. Ban said, calling on countries to deliver a draft text for the 2015 Agreement which will provide a clear and solid foundation for negotiations to be held next year in France.

United Nations Secretary-General Ban Ki-moon pointed out at the 20th session of the Conference of the Parties that climate action taken today will more likely push for stronger agreements tomorrow.

“The more we delay, the more we will pay,” Mr. Ban said, calling on countries to deliver a draft text for the 2015 Agreement which will provide a clear and solid foundation for negotiations to be held next year in France.

“Actions now will set a strong foundation for Paris, and go hand-in-hand with our efforts to realize sustainable development,” Mr. noted.

The U.N. chief reiterated that climate action and sustainable development are “two sides of the same coin,” urging States to act so as to keep average global temperature rise below the internationally agreed limit of 2 degrees Celsius.

“We have been talking over the last two decades. Now it is time to begin real, serious negotiations based on a draft text,” he said.

“A non-paper is not an action. I urge all delegations to overcome all procedural matters and deliver a text with a formal status, so that the work of negotiating can begin in earnest at the February session. We don’t have a moment to lose,” he explained.

Meanwhile, earlier this week, climate activists from around the world and Peru moved to the streets of Lima to participate in the People’s Climate March.

The World Wide Fund for Nature commented that the march demonstrates the importance of climate change to ordinary citizens in Peru and throughout the world.

“Negotiators should look at this and understand that people from different parts of Peruvian society want much faster action on climate change,” said Samantha Smith, leader of W.W.F.’s Global Climate and Energy Initiative. “This is a region where people are losing their lives and livelihoods because of climate change.”

“Climate change is denying people of the basic human rights of food security and water security. It is also taking away their land. When we march we are protecting the rights of those who are losing their rights every day through climate change,” said Ms. Smith. – EcoSeed Staff