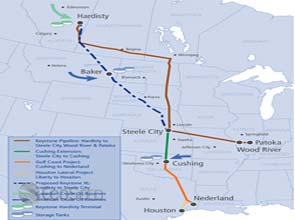 “As promised, the GOP leadership in Congress wants to play pipeline politics with our future. The president is focused on a single question: Is the tar sands pipeline in the national interest”

President Barack Obama will not sign the Keystone Pipeline bill, saying that it is still being considered if it is in the best interest of the country.

During the press briefing, when asked if the president has taken a “fresh look” at the proposed legislation regarding the Keystone Pipeline, Press Secretary Josh Earnest noted that the present legislation is not altogether different than the legislation that was introduced in the last Congress.

He further explained that the White House has put out a statement of administration position which indicated that the president would have vetoed had the Keystone Pipeline bill passed Congress before.

Press Sec. Earnest then confirmed that if the Keystone Pipeline bill passes Congress, Pres. Obama will not sign it.

He explained that the project is still being evaluated on whether or not it is in the best interest of the country, adding that the pipeline route, particularly in Nebraska, has yet to be finalized, preventing any final conclusion on the matter.

“The president made the right call. What’s needed now is for him to kill the dirty tar sands pipeline outright,” said Ms. Droitsch.

“As promised, the GOP leadership in Congress wants to play pipeline politics with our future. The president is focused on a single question: Is the tar sands pipeline in the national interest?”

“It’s not. It would pipe some of the dirtiest oil on the planet through the breadbasket of America so most of it could be shipped overseas. It’s not a play to help our country. It’s about big profits for big oil – and big pollution for the rest of us,” she explained.

“On principle, the president is right to put the national interest first. It’s not the role of Congress to short-circuit the legitimate process review designed to ensure the best outcome for the country. All evidence makes it clear: The tar sands pipeline is a bad idea. It needs to be denied,” Ms. Droitsch.

N.R.D.C. has opposed the pipeline right from the start, saying that it will contribute billions of metric tons of carbon pollution (see related story), and that Canada has not proposed any credible mitigation plan that would address the greenhouse gas emissions despite the country’s growing tar sands industry and continued push for the pipeline (see related story).

The Keystone Pipeline project is a 1,179-mile, or 1,897-kilomter, crude oil pipeline beginning in Hardisty, Alta., and extending south to Steele City, Neb. According to TransCanada, the pipeline is a critical infrastructure project for the energy security of the United States and for strengthening the American economy. – L. Polintan