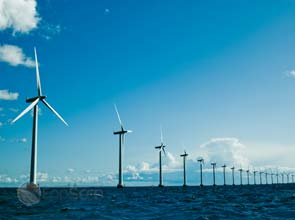 Siemens Energy won a contract from Dong Energy to supply 111 wind turbines for a 400-megawatt offshore wind project that is set to be the largest offshore wind power plant in Denmark.

Located off the island of Anholt in the Kattegat Strait, the 10 billion Danish kroner ($1.68 billion) offshore wind farm can reportedly supply electricity to 400,000 households annually, which is roughly equal to 4 percent of Denmark’s total energy consumption.

Based on the tender specifications, the wind farm must supply the initial power by the end of 2012 and must be commissioned by the end of 2013. Delays will result in a reduced tariff income and a penalty.

Siemens will manufacture the wind turbines at its plant in Brande, in central Jutland. Aside from manufacturing, installing and commissioning the turbines, the company will also provide a service and maintenance agreement for the first five years of operation, with an option of selected services over the next five years.

“Outside of Europe, we see good opportunities for offshore – especially in China with its shallow water near the consumption centers on the coast as well as in the United States, where Siemens already has entered the market being selected for the Cape Wind project,” he added.

Siemens is an established leader in the offshore wind segment, having provided wind turbines to over 50 percent of the world’s offshore installations. The company also installed more than 150 units in offshore projects across Europe to date and sold another 1,100 units.
Siemens Energy, a subsidiary of Siemens A.G. (FWB:
SIE
, NYSE:
SI
), recorded about 23 billion euros ($28.83 billion) in revenues from its wind turbine business in the 2009 fiscal year. The conglomerate claimed that its ecofriendly technologies helped reduce a total of 210 million tons of carbon dioxide emissions, which is equivalent to the combined annual carbon emissions of New York, Tokyo, London and Berlin.

In addition, Siemens will acquire 49 percent of A2SEA A/S, a provider of installation services for offshore wind construction, for approximately 860 million Danish kroner. The payment will be made in two tranches in 2011, while the agreement will be concluded in the fourth quarter of the same year.

“With our investment in A2SEA, we are showing our clear commitment to strengthening the future of the offshore wind industry,” said Mr. Dehen.

Dong Energy is also an offshore wind giant, responsible for half of the world’s largest offshore wind farms such as the Horn Revs 2 wind farm in Denmark.

The company also closed a £250 million ($379.39 million) loan facility in June with the European Investment Bank that will finance the 1-gigawatt London Array offshore wind farm, which will be the world’s largest offshore wind farm once it is completed.

The London Array will have the first 630 MW running in 2012 to provide clean energy for the London Olympics.

“Dong Energy’s goal is to reach at least 3,000 MW of wind turbine capacity by 2020, and London Array is a cornerstone in this transition towards a greener future,” said Carsten Krogsgaard Thomsen, chief financial officer of Dong Energy.

Europe has an estimated 100 GW of potential offshore wind power, but only about two percent is being tapped.

At present, Britain ranks as the most important offshore wind market, but other major players include Germany, France, Belgium, the Netherlands, Italy, Finland and Norway.