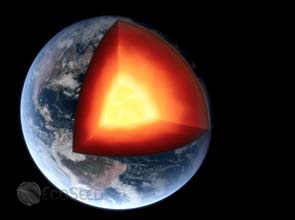 Researchers from Washington State University mimicked the super-high pressures found within the earth’s core to create a new material capable of storing vast amounts of energy. The team, led by Choong-Shik Yoo, a chemistry professor in the university, created the material in a diamond anvil cell, a small diameter device capable of producing extremely high pressures in a small space.

The researchers found that the material’s molecules stay relatively far apart from each other at normal atmospheric pressure. As the pressure increases, the molecules compress and the material becomes a two-dimensional, graphite-like semiconductor.

The researchers then increased the pressure to more than a million atmospheres, comparable to what can be found halfway to the earth’s core. Squeezing forced the molecules to make a tightly bound three-dimensional metallic network structure.

Thus, a huge amount of the mechanical energy from the compression forces was stored as chemical energy in the molecules’ bonds.

The research is basic science, Mr. Yoo said, but it shows it is possible to store mechanical energy into the chemical energy of a material with strong chemical bonds.

The newly created material can be used in different future applications, such as a new class of energetic materials, better energy storage devices, high-temperature superconductors and super-oxidizing materials for destroying chemical and biological agents.

The team’s research was published in the journal Nature Chemistry, with Mr. Yoo as the lead author.