Spain slashes incentives for wind and C.S.P., PV could be next 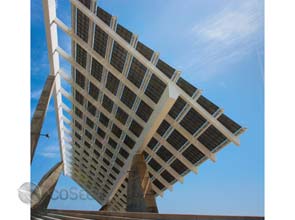 With blessings from the country’s wind and solar thermal sectors, the Spanish government will trim down renewable energy subsidies through feed-in tariff rate cutbacks, delayed incentives implementation and other measures.

The Spanish Ministry of Industry, Tourism and Trade will lower feed-in tariff rates and put on hold certain wind and solar thermal energy projects to help address losses incurred from what analysts see as excessive support.

The decision is in line with agreements made with the Spanish Wind Energy Association and Protermosolar, Spain’s concentrated solar power industry group.

Spain’s renewables incentive scheme guarantees fixed wholesale prices to power producers for their output at rates lower than market prices, but with other forms of inducement for renewable energy investments.

Energy information provider Platts estimates that the new measure would save around 1.3 billion euros through a 35 percent reduction in premiums paid for wind energy until January 1, 2013.

Concentrating solar power plants, meanwhile, will not take advantage of the special rates they enjoy during their projects’ first year of operation. The government will also delay the activation of concentrating solar plants which have been approved previously for feed-in tariff support.

In addition, the government will limit the number of hours when both wind power and concentrating solar plants can receive tariff premiums on top of the market price.

Spain’s feed-in tariff in a nutshell

Spain has legislated that 20 percent of its energy must be sourced from renewable. Since renewable energy is not yet generated at prices that are as competitive as those of traditional energy sources such as fossil fuels, governments across Europe turn to feed-in tariffs.

The Spanish government’s feed-in tariff system allows renewable energy producers to sell their electricity output directly through distributors either by selling at the market price with a premium or at an attractive regulated rate.

Under its feed-in tariff mechanism for solar photovoltaic created in 2007, Spain requires utilities to pay rates that have been determined by the government under long-term contracts. These electricity rates are set higher than those for traditional power – up to 45 euro cents per kilowatt hour for grid-connected solar projects by September 2008 – to encourage new solar installations.

The Spanish government initially set a cap of 400 MW through 2010, but by September 2007 installations already reached about 344 MW. The government raised the target for 2010 by more than threefold to 1.2 gigawatts.

But in 2008 alone, the Spanish PV market had installed 2.51 GW, or about half of the total installations worldwide for that year.

As the industry literally overheated, the government scrambled to revise its rules.

By September 2008, Spain laid out a 500-MW cap for solar installations. At the same time, it brought down regulated tariff for PV installations by up to 36 percent for rooftop and ground installations. It also created a registry system for PV projects.

However, many projects reportedly hurried to connect to the grid before the rules took effect, giving rise to speculations of fraudulent projects.

In May 2009, the Spanish government required other renewable energy technologies to enlist in a newly created registry for them in order to qualify for regulated tariff.

The Spanish government has yet to come to an agreement with the PV industry on new tariff rates such as those for wind and concentrating solar power, but it reportedly plans to cut PV subsidies by as much as 25 percent this year, causing further anxiety in the sector.

Spain is trying to put under control a ballooning tariff deficit estimated to have accumulated to 16 billion euros.

Under the country’s systems, energy consumes defer payment of a portion of their bill yearly, which builds up the deficit. This generates a debt to power companies which the Spanish government guarantees.

A group of international investors has called on the Spanish government not to renege on the feed-in tariffs it has set for solar PV in a letter sent in May directly to President José Luis Rodríguez Zapatero.

They said that Spain’s tariff deficit is due in large part to not passing on the full cost of conventional and renewable energy to consumers.

It claimed that of the country’s accumulated deficit, about 3.5 billion euros are attributable to special regime generation, particularly from wind, while the rest was generated by system balancing costs and not passing on the costs of high oil and gas prices from 2007 to 2008.

The investors also stressed that a retroactive tariff change will result in investor confidence in Spain, and even across the European Union, as well as higher borrowing costs and reduced share prices.

“We accept that due to recent cost reductions in technology arising from PV investments in recent years (which we were part of funding), there should be a managed and reasonable reduction to the tariff for new solar projects.

“We support such changes. However this is not relevant to our existing investments which were made in a different time, and at a different cost base,” the group explained.

The uncertainty of the tariff regime is proving to have far reaching effects in the industry. Bloomberg reported that Renovalia Energy S.A. and Grupo T-Solar Global S.A. have postponed their planned initial public offerings due to regulatory uncertainty.

Until the Spanish government clarifies its feed-in tariff rules, insecurity will remain and deter investments.