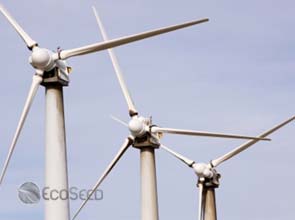 Chinese wind turbine maker Sinovel Wind Group began building the wind farm in the Yangtze River delta in September 2008 and completed construction in February. The project is near the Donghai Bridge connecting Shanghai and the Yangshan port. The wind farm transmits electricity using a submarine cable.

The wind farm was subjected to a trial period for over a month according to the Shanghai Electric Power Company, the city’s power supplier. Initial electricity produced was sent to the Shanghai World Expo site.

Shanghai Electric sees the project as a good start for the build-up of clean energy in the city. “The operation of the Donghai Bridge wind farm provided a good experience for the development of new energy,” said Li Chonghe, the power company’s vice general manager.

Currently, the wind farm’s capacity is equivalent to only 1 percent of the city’s current total power production of around 18,200 MW generated mostly from traditional fuel-based sources, China Daily said.

Construction of the Donghai project’s second phase on the west side of the bridge, which is also projected to produce about 100 MW, has been approved according to authorities.

Earlier this month, a top Chinese official revealed at a forum in Nanjing that China’s wind power generation capacity is estimated to grow by 36 percent on a year-on-year basis by the end of 2010, making China the second largest wind power producer in the world.