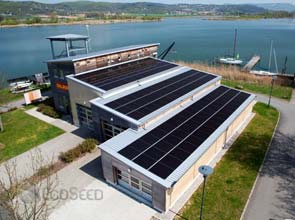 A German researcher from Delft University of Technology has demonstrated how to raise the energy output of amorphous silicon solar panels from around 7 percent to 9 percent.

In his doctoral research, Gijs van Elzakker investigated adaptations in the production processes of amorphous silicon modules to increase the output without any additional costs.

Amorphous silicon panels are formed by depositing a thin layer of silicon material – about 1 micrometer thick – on a substrate material. It can also be produced at lower temperatures and deposited on low-cost substrates such as plastic, glass and metal, making amorphous silicon the leading thin-film photovoltaic material.

Amorphous silicon is also used on small solar-powered consumer devices such as wristwatches and calculators. It costs less to produce than crystalline silicon, although it also has too low of an efficiency rate for large-scale energy production.

While crystalline silicon achieves a yield of about 18 percent, amorphous solar cells’ yield remains at around 7 percent.

The low efficiency rate is partly due to the Staebler-Wronski effect, which involves decreasing electrical output over a period of time. The phenomenon can result in up to 20 percent loss in output before the material stabilizes.

The Staebler-Wronski effect manifests itself in the first hours when the panels are exposed to sunlight, thus decreasing the energy yield of an amorphous silicon panel from 10 percent to around 7 percent.

In his research, Mr. van Elzakker studied a silicon layer made of silane gas in the panels and discovered that the structure of the silicon layer can be changed by diluting the silane gas with hydrogen during the production process. The use of hydrogen can reportedly reduce the Staebler-Wronski effect.

«We showed that the influence of the Staebler-Wronski effect can be considerably reduced in this way. If this knowledge is applied in the manufacture of this type of solar cells, a yield of 9 percent can be expected,» he concluded.

Mr. van Elzakker’s findings are being applied on the production line of Iventux Technologies, where he currently works.