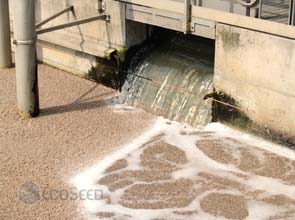 Engineers at Oregon State University have discovered that the proper nanotech coating could increase the electricity output of wastewater-to-energy production by more than 20 times.

In producing power from wastewater, bacteria are placed in an anode chamber – where they form a biofilm, consume nutrients and grow – to release electrons.

The researchers then experimented with the use of new coatings on the anodes of microbial electrochemical cells to generate more electricity from sewage. They found that coating graphite anodes with a nanoparticle layer of gold can increase electricity production by 20 times, while coatings with palladium produced an increase as well, but not nearly as much.

Meanwhile, nanoparticle coatings of iron, which is cheaper than gold, can also produce similar increases for at least some types of bacteria.

The team’s findings, which were published online in the Biosensors and Bioelectronics journal, brings the researchers closer to a technology that can clean biowaste while producing clean, renewable electricity. This will help make sewage treatment plants completely self-sufficient in terms of energy usage.

“This is an important step toward our goal,” said Frank Chaplen, an associate professor of biological and ecological engineering.

“We still need some improvements in design of the cathode chamber, and a better understanding of the interaction between different microbial species. But the new approach is clearly producing more electricity.”

The technology is successful on a laboratory basis, but advances are still necessary to lower its costs, improve efficiency and electrical output and indentify the possible materials with the lowest cost, the team said.

The researchers are now working on a technology that uses a similar approach to produce hydrogen gas from wastewater treatment.