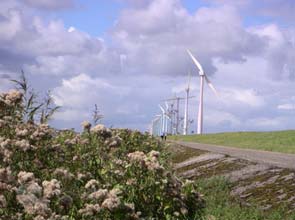 Comprising of a portfolio of wind energy facilities, the wind center will dwarf the 781.5 MW Roscoe Wind Farm in Texas, which currently holds the record for the largest wind generating capacity in the world.

A project under the Alta wind center is the 800-MW Alta-Oak Creek Mojave project, which consists of 320 wind turbines. The wind farm is expected to be completed in early 2011.

The Alta wind center will generate enough wind energy to sustain the electricity needs of 1.1 million people, which is roughly the equivalent of 275,000 Californian homes. Southern California Edison already purchased 1,550 MW of the energy generated by the wind center under a power purchase agreement signed in 2006.

Upon completion, the project will also increase California’s installed wind energy capacity by 25 percent and will represent 10 percent of the renewable power purchases required for the state’s regulated utilities. The state’s renewable portfolio standard mandates utilities to source 33 percent of their energy supply from renewable by 2020.

Terra-Gen expects the Alta project to offset more than 52 million metric tons of carbon dioxide – the equivalent of removing 446,000 vehicles from the road – and conserve over 888 million gallons of water annually.

More than 3,000 jobs will be created during the manufacturing, construction and operational stages of the project, increasing California’s wind industry-related jobs by 20 percent. The project will also inject $1.2 billion in Kern County’s local economy.

«Having the world’s largest wind project break ground in our state is tangible evidence that our pioneering policies are drawing investment, improving the economy and creating jobs now when we need them most,” added Arnold Schwarzenegger, governor of California.

The Alta Wind Energy Center will be equipped with nearly 600 wind turbines, 190 of which will be provided by Vestas-American Wind Technology. Amounting to 570 MW of wind energy, this is the largest wind turbine order that Vestas received for a single site.

Terra-Gen already secured over $1.5 billion in financing for the wind project through a variety of funding efforts, including a construction financing round, a construction bridge loan facility, and ancillary credit facilities.