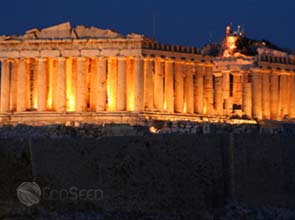 Greece  said on Wednesday it will invest 12 billion euros ($15.59 billion) on environmental and energy projects over the next five years to boost its ailing economy and create new jobs.

Greece needs to spur economic growth to fight rising unemployment and generate revenues to help pay down its debt mountain after 2012, when a 110 billion euro bailout it has obtained from the European Union and the International Monetary Fund expires.

«The ministry hopes the programme will decisively contribute to face recession and lead to dynamic economic growth,» Ms. Birbili said in a press release.

Most public investment under the plan, about 7 billion euros, is earmarked for urban facelifts such as new subways, parks and pedestrian areas in Athens, the country’s congested and polluted capital.

The government expects private companies to invest a total 14 billion euros in energy projects, such as new natural gas pipelines and storage terminals in northern Greece.

The government has already said earlier this year it will take measures to attract a total 22 billion euros in energy investments this decade.

Although Greece is one of the most sunny and windy countries in Europe, wind and solar power accounted just for 4 percent of electricity output in 2009, compared with more than 60 percent generated from burning lignite, a polluting form of brown coal.

Greece has pledged to raise the renewables share to 40 percent by 2020.