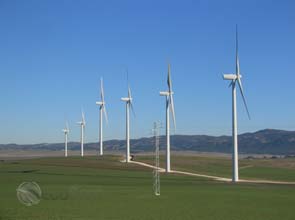 The deal also provides an option for Sea Breeze and the Quatsino, Tlatasikwala and Kwakiutl First Nations to buy equity positions in the project.

The Knob Hill Wind Farm will be located on an elevated plateau in northern Vancouver, within the territories of the three First Nations, to harness the area’s prevailing southerly and westerly winds. The plateau also boasts of very high average wind speeds.

The project’s first phase will feature up to 66 wind turbines that are capable of generating approximately 300,000 megawatt-hours of electricity – equivalent to the annual electricity needs of about 30,000 local homes.

Construction will begin in 2011, while delivery of electric power will start in late 2012.

“The wind industry is a rapidly growing business globally,” noted Paul Manson, president and chief executive of Sea Breeze Power. “We see this as a very positive vote of confidence by one of the world’s leading power generation companies for the future of British Columbia’s renewable energy industry.”

Sea Breeze will receive a developer’s fee as well as a continuous revenue royalty throughout the duration of the power purchase deal.

Sea Breeze Power Corporation is a Vancouver-based renewable energy company that develops utility-scale wind projects and hydroelectric projects. The company is also involved in the development of large-scale electricity transmission projects through a joint venture partnership with Boundless Energy L.L.C.