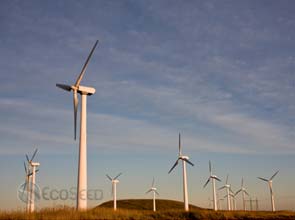 The wind industry in the United States has remained in a slump with only 700 megawatts of new generating capacity installed during this year’s second quarter, the American Wind Energy Association reported.

Texas was the most active state during this trying time, as Iberdrola Renewables installed the 201.6 MW Penascal II wind project in Kenedy County. The state also plans to add an additional 200 MW in its wind generation portfolio from the E.ON Climate and Renewables’ Papalote Creek II wind project.

Aside from wind installations, new manufacturing activity also dropped from the past couple of years, with only two new manufacturing facilities online in the first half of 2010, compared with seven in 2008 and five in 2009.

The wind industry’s struggle began in the start of the year when it only saw 539 MW of new wind installations in the first quarter – its lowest figure since 2007.

The association pinpointed the continued lack of long-term market signals, as well as low power demand and price, as culprits for the industry’s decline. It revealed that even with more than 5,500 MW of wind projects under construction and more in the pipeline for the second half of 2010, wind installations will still fall to 25 percent to 45 percent below 2009 installations.

A strong national renewable energy standard is now a must to attract investors and stabilize the wind industry, the association said.

“A [renewable energy standard] would stimulate utilities to buy wind power and conclude power purchase agreements, get the demand locomotive going again, and work in tandem with Recovery Act funding to produce spectacular results as seen in 2009,” it added.

“Without strong, supportive policy like a [renewable energy standard] to spur demand, investment, and jobs, manufacturing facilities will go idle and lay off workers if Congress doesn’t act now – before time runs out this session,» Denise Bode, chief executive of the association, stressed.

The wind industry almost matched natural gas in new installations as compared with the previous two years. Furthermore, the two sectors make up approximately 90 percent of all new annual generating capacity installed over the past five years.

More coal and natural gas facilities have been established than wind farms and other renewable sources to date.