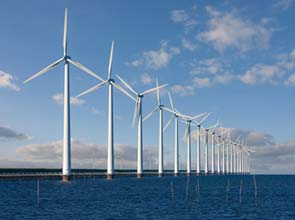 Proponents of Cape Wind have made an initial agreement with Massachusetts’ attorney general to cut the rates of the electricity to be produced by what could be the United States’ first offshore wind farm.

In a meeting with Martha Coakley on Friday, National Grid P.L.C. and Cape Wind Associates L.L.C. agreed to revise contracts for the 420-megawatt offshore wind project off the Nantucket Sound to reduce the costs to consumers.

The parties would bring the starting price of the project’s electricity from 20.7 cents to 18.7 cents for each kilowatt-hour starting 2013. The rate would go up by an average of 3.5 percent each year if the entire project is built by then.

If only a portion of the Cape Wind offshore wind farm is built, the starting price would be capped at 19.3 cents/kWh. About 100 offshore wind turbines are planned for the 430-megawatt project.

National Grid and Cape Wind also agreed to the rate cut but expects the project to qualify for federal loan guarantees and some reduction in building costs.

The revised rates would result in about $456 million in savings for consumers over the 15-year span of the power purchase deals, the companies said.

Ratepayers could also gain additional savings of up to $55 million from federal loan guarantees, project cost reductions and discounted power purchases in the future, they said.

“We have reached an agreement that we believe is a much fairer deal for ratepayers and will reduce the proposed costs for consumers and businesses by up to $450 million over the life of the contract,” said Ms. Coakley.

“This agreement accomplishes two important goals – working to develop renewable energy, specifically off-shore wind in Massachusetts, and ensuring customers get the benefits of this project under a much fairer price than what was originally proposed,” she said.

Critics of the offshore wind project have argued that the United States’ first offshore wind farm would cost more than electricity consumers would be willing to shell out. In the original contract, National Grid agreed to purchase 50 percent of the facility’s energy at the rate of 20.7 cents/kWh.

The Alliance to Protect Nantucket Sound said power consumers will suffer from higher electric bills if the Cape Wind project pushes through. Citing an assessment by energy management consultancy group W. Robert Patterson & Associates, the group claimed that National Grid customers will pay an additional $442 million over the 15-year period due to the contract’s progressively increasing rates.

Proponents of the project, however, challenge critics to back up their claims.

«I have no idea where they are getting their numbers from – maybe they are assuming there will be no fossil fuel price increases,» said Mark Rodgers, communications director for Cape Wind, in an interview with Reuters.

The act requires utilities to source at least 5 percent of their power output from renewable sources or meet the difference with renewable energy credits. Mr. King said Cape Wind could satisfy up to 3.5 percent of this.