Vattenfall at the helm of new German offshore wind project 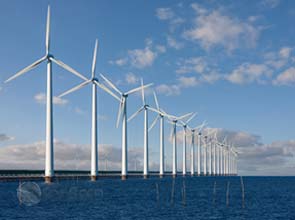 Vattenfall A.B., Europe’s fifth largest electricity producer, is ready to pour money into its offshore wind joint venture with German utility Stadtwerke München that is worth over 1 billion euros ($1.4 billion).

The state-owned utility is the majority owner of DanTysk Offshore Wind G.m.b.H., holding a 51 percent stake, while Stadtwerke owns the remaining 49 percent in line with the companies’ joint venture agreement in July.

Vattenfall said the project has received approval from relevant authorities and preparations are already underway, including signed supplier contracts. Foundational construction and laying of cables are already being negotiated.

The 288-megawatt DanTysk offshore wind farm will rise 70 kilometers to the west of the German island of Sylt in the North Sea. Construction is scheduled to start by 2012 and end by 2014.

Stockholm-based Vattenfall will operate the DanTysk project, which has an estimated output of 1,310 gigawatt-hours of electricity yearly. It is also expected to provide clean energy to over 500,000 households based on an average electricity consumption of 2,500 kilowatt-hours per home.

“Together with previously initiated or implemented projects, DanTysk will enable us to supply approximately 800,000 households with renewable electricity as well as meet the electrical needs of the Munich subway and tram system,” said Kurt Mühlhäuser, head of the Stadtwerke München executive board.

Vattenfall revealed it has tapped Siemens A.G. to supply 80 units of 3.6-MW wind turbines with a rotor diameter of 120 meters. Siemens will also provide maintenance services to the project.

Øystein Løseth, Vattenfall chief executive, said that DanTysk is the continuation of a string of projects it has pursued in Germany beginning with the Alpha Ventus project, Germany’s first offshore wind farm.

“Wind power is essential for Vattenfall to reach its ambitious target of climate neutral energy generation by 2050. Since German offshore industry is quite young, political support and clear regulations are very important,” Anders Dahl, head of Vattenfall wind power, said in July.