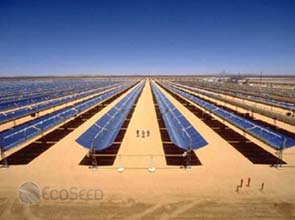 The United States Department of the Interior continued with its string of approvals as it authorized the construction of the 250-megawatt Genesis solar project on publicly owned lands in California.

Genesis Solar L.L.C. will receive a right-of-way grant from the land management bureau to use the public property for 30 years in 1,950 acres of land in Riverside county.

With a total output of 250 MW, the Genesis Solar Project can provide enough electricity for up to 187,000 homes. The project will create over a thousand jobs in construction, and pay out $628,000 through taxes according to the Interior Department.

Genesis Solar said it will allocate funding for more than 2,000 acres of suitable habitat for desert tortoises and Mojave fringe-toed lizards. The project will also use dry cooling to lessen water consumption to only 200 acre-feet annually.

Genesis Solar can apply for a loan guarantee of up to $800 million in stimulus funds under the Department of Energy’s Financial Institution Partnership Program.

The project can also recover $300 million of the eligible cost of the facility through tax credits from the Recovery Act.

The Genesis Solar project is a product of a federal government and state partnership between the Interior Department’s agencies and California state agencies to speed up the development of renewable energy projects on California’s public lands.

This model has allowed for the approval of six other large-scale solar energy projects that will bring nearly 3 gigawatts of clean electricity to the California power pool – enough to meet the electricity demands of 851,000 to 2.1 million homes.

All of these projects will reportedly create thousands of construction jobs and more than 600 permanent jobs for operating them.

“This fast-track renewable projects process clearly demonstrated how separate government processes can be streamlined, without cutting any corners or skipping any environmental checks and balances in the process,” said interior secretary Ken Salazar.