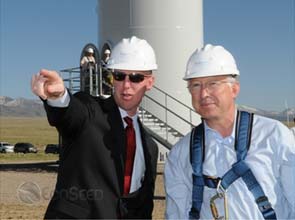 The United States Department of the Interior aims to implement a more efficient and coordinated permitting process for offshore wind to accelerate the development of projects along the Atlantic coast.

The Smart from the Start initiative for the Atlantic Outer Continental Shelf will facilitate siting, leasing and construction of new projects, which will help developers go through the permitting process without the burden of red tape, said interior secretary Ken Salazar.

Earlier, the department’s Bureau of Ocean Energy Management, Regulation and Enforcement proposed to revise its regulations to simplify the leasing process filed by only one developer.

The revision will eliminate a redundant step, thus potentially reducing the leasing period for offshore wind projects by six months to one year.

“This accelerated and focused approach to developing the nation’s Atlantic wind resources will encourage investment while ensuring that projects are built in the right way and in the right places,” said Michael Bromwich, the bureau’s director.

The bureau will collaborate with several Atlantic states, including Maryland, Delaware, New Jersey, Virginia, Rhode Island and Massachusetts within the next 60 days to identify wind energy areas – offshore locations most sustainable for wind energy development.

By 2011, requests for interest and calls for information will be forwarded for the new wind energy areas for environmental assessments. The bureau will also select wind energy areas in other states such as New York, Maine, North and South Carolina and Georgia.

“If we are wise with our planning, we can help build a robust and environmentally responsible offshore renewable energy program that creates jobs here at home,” Mr. Salazar said.

Maryland’s request for information has already been issued while those for New Jersey, Virginia, Rhode Island and Massachusetts are being developed.

Although developers still need to fulfill appropriate and comprehensive site-specific environmental reviews for potential projects, the bureau will help with the project proponents to ensure these reviews are aided by an efficient system.

“As the pipeline of projects begins to move forward more rapidly, the environmental and economic benefits of offshore wind, including manufacturing facilities and associated jobs, can be realized,» she said.

Aside from offshore wind projects, the bureau will also oversee applications to build offshore transmission lines.

The Smart from the Start initiative is the latest in a series of government actions to spur renewable energy development on the Atlantic coast. In early 2009, Mr. Salazar hastened the process for approving the final rules for offshore wind development by establishing a regulatory framework that promotes responsible development.