E.U. to spend over $ 164 million for solar and wind research 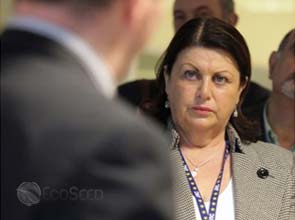 The European Union will build new research infrastructures, one each for solar and wind, for which it will spend at least 125 million euros ($163.7 million) in the next few years.

The wind research facility in Denmark, called the WindScanner, can produce detailed maps of wind conditions at a wind farm covering several square kilometers. This knowledge can be used for developing more efficient, stronger and lighter wind turbines.

The facility will start producing data in 2013. Building it will cost between 45 million and 60 million euros. It will be operated by the Riso DTU National Laboratory for Sustainable Energy near Roskilde, leading a consortium with six other partners from Germany, Greece, Spain, the Netherlands, Norway and Portugal.

The solar research project E.U.-Solaris is intended for developing new technologies for concentrated solar power. It will be placed at the Advanced Technological Centre for Renewable Energy in Tabernas, Almeria in Spain.

Other complementary sites at several leading European laboratories – representing European countries with the most solar potential like Portugal, Italy, Greece and Turkey – will be part of the new research infrastructure. Construction will cost about 80 million euros. Solar leader Germany will provide technology for this research effort.

The remaining funds will be used for a nuclear fission research facility in Belgium which will look into the reduction of radioactive nuclear waste.

The European Union has a number of research initiatives. The three sites were announced under Innovation Union, one of the seven flagship initiatives of the Europe 2020 Strategy for a “smart, sustainable and inclusive economy.”

The research infrastructures are also part of the European Strategy Forum on Research Infrastructures, a strategic plan to develop the scientific integration of Europe and to strengthen its international outreach.

In its updated Roadmap 2010, Esfri has identified 50 new research infrastructures or major upgrades of existing ones, in order to stay at the forefront of research over the next 10 to 20 years.

Their total construction cost amounts to some 20 billion euros and their operational cost would be around 2 billion euros per year.

One of the objectives of Innovation Union is to launch by 2015 the construction of 60 percent of these priority European research infrastructures, primarily financed by E.U. member states with the support of European Programmes.