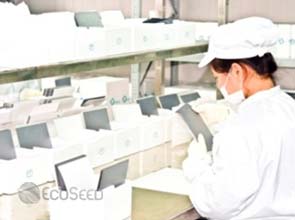 GCL-Poly Energy Holdings Limited will supply 10,031 megawatts’, or 10 gigawatts’, worth of wafer and polysilicon products to JA Solar Holdings Company (Nasdaq:JASO) in the next five years.

The contract is among the major deals GCL-Poly got this year. In November, the company bagged a total of 1,165 MW of solar wafer deals from Indosolar Limited in India and Neo Solar Power Corporation in Taiwan.

“This should help us establish our presence in South Asian market. In particular, India has a large population of almost 1.2 billion with immense market potential,” said Zhu Gongshan, chief executive of GCL-Poly referring to the latter deal in a prior statement.

The company also received a $100 million boost from Wells Fargo & Company (NYSE:WFC) for solar farm projects in the United States.

GCL-Poly, China’s largest polysilicon producer, said it has over 1,000 MW of solar farm projects in the pipeline.

It wants to expand its annual polysilicon and wafer production capacity which are expected to hit 21,000 metric tons and 3.5 GW respectively by yearend.

JA Solar recently exceeded its expected solar shipments and forecasts 450 MW of shipments for the latter quarter of this year. For the full 2010, the company anticipates up to 1.45 gigawatts of total solar shipments, which is larger than its previous shipment guidance of 1.35 GW.

In addition, JA Solar already bagged more than 1.2 GW of product delivery for 2011, which it plans to meet through its 1.8 GW of annual solar cell manufacturing capacity achieved this third quarter. It plans to further raise this capacity to 1.9 GW.