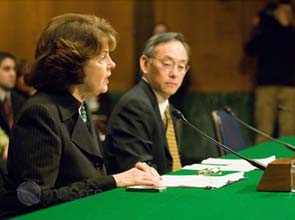 As the year draws to a close, a group of legislators pressed Senate leaders on Thursday to include the Treasury Grant Program in the national budget plan to extend federal support for renewables through 2011.

Seventeen senators led by Senator Dianne Feinstein of California signed a letter addressed to Senator Harry Reid, the majority leader, and finance chairman Senator Max Baucus, arguing that the program is largely responsible for the sustained growth of the renewable energy sector in the onset of the global economic recession.

Created under the 2009 Recovery Act to directly provide tax incentives to renewable energy developers, the program is slated to expire at the end of 2010. The program reportedly released approximately $18.2 billion in clean energy investments, resulting in the installation of 8.6 gigawatts of renewable energy capacity to date.

The program also aided the significant expansion of domestic wind power generation, which created more than 55,000 green jobs, according to a study by the Lawrence Berkeley National Laboratory. The senators cited another study by consulting firm EuPD Research that says extending the grant program by two years would create an additional 65,000 green jobs in the solar industry and establish enough new capacity to meet the power demands of 1.2 million homes.

Recently, Mr. Baucus introduced the Middle Class Tax Cut Act of 2010, which includes a provision seeking to create a direct payment option to facilities engaged in the manufacture of advanced energy property through the Treasury Grant Program.

However, the grant program was excluded from the recent tax cut package developed by the Obama administration and its Republican cohorts in the Congress. If the program expires at year-end, the renewable energy sector will be left to face a significant setback in sourcing funds.

The program’s proponents noted a survey of all the leading banks in the tax equity market. According to the evaluation, financing for renewable energy will drop by 56 percent in 2011 if the grant program is allowed to expire.

“If Congress allows taxes to rise on renewable development, momentum would be lost and the growth of renewable energy would be jeopardized,” said the senators in their letter.

The sentiment is shared by representatives from different clean technology sectors, which are also calling for an extension of the grant program.

“This tax credit should be extended, or else tens of thousands of U.S. workers will be at risk for losing their jobs, and others won’t be called back from layoffs that have already taken place because of uncertainty over this government policy,” said Denise Bode, chief executive of the American Wind Energy Association.

«Clean tech represents an enormous economic opportunity for the United States, and if we are to be a global leader in this area, we must support the growth of companies and entrepreneurs,” added Rey Ramsey, president and chief executive of TechNet, a lobbying organization for technology.