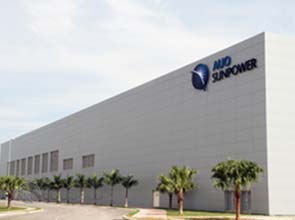 SunPower Corporation and Taiwan-based AU Optronics Corporation’s joint venture formally opened a new solar cell production capacity in Malaysia which at full capacity in 2013 will be able to churn out 1,400-megawatts of solar capacity.

SunPower and AU Optronics, which formed the joint venture in May, own 50 percent each in the $700 million partnership.

The two-building facility, Fab 3, will occupy 180,000 square meters of land in Melaka, south of Kuala Lumpur. It’s about the size of seven American football fields. It will house 28 solar cell production lines when fully online.

Malaysia is being touted to become the third largest solar cell producer following China and Germany and will account for 17 percent of global production by 2020, according to some reports.

The facility was recognized by the International Energy Agency for its energy-efficient design. Fab 3 is equipped with features that help boost operations efficiency and trim down energy costs, such as a solar parking lot that has up to 2.6 MW of annual power generation.

Rooftop solar panels in other site structures will be capable of producing over 10 MW of electricity every year.

Malaysian Prime Minister Tan Sri Muhyiddin Yassin has been quoted as saying high global demand and the solar cell manufacturers’ shift from high-cost countries such as Germany to low-cost ones like Malaysia will put the latter in second place in the world market.