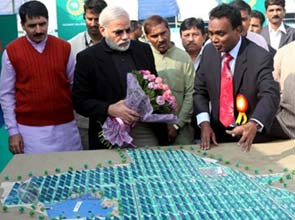 Construction has begun on a 500-megawatt solar park worth about 12.47 billion Indian rupees ($278.9 million) in Gujarat, India, touted to be the largest of its kind in Asia.

State-owned Gujarat Power Corporation is developing the solar park, which will cover 2,000 hectares of land, 1,000 hectares of which was government wasteland, in Charanka village near Santalpur in Patan district, northern Gujarat.

Based on a government-commissioned study, the land is a prime area for solar generation with 5.5 kilowatts to 6 kilowatts for every square kilometer of daily solar radiation, 330 days annually.

Gujarat Power will acquire most of the land while separate plots will be leased to foreign and local energy developers for the next 30 years.

The leases want to attract 75 billion rupees in investment through the installation of solar power generation units and the construction of production and research and development facilities.

The government said land acquisition processes are already ongoing and a smart grid transmission network for the project is in the works by the Gujarat Energy Transmission Corporation Limited.

Under the state’s solar power policy, the government promised to purchase up to 933 MW of solar power and is expected to haul in 650 billion rupees of investment in the next three to four years.

The government reported that it has actually signed 200 MW worth of power purchase agreements with 17 solar companies, which are obliged to activate their solar generation units by December 2011.

Gujarat, the only Indian state that provides electricity to villages on a 24/7 basis, is actively developing renewable energy sources such as wind, hydropower and tidal energy, as part of its electrification goal.

Gujarat chief minister Shri Narendra Modi said its government is trying to show a way out in the time of energy crises by exploiting all possible natural means of energy.