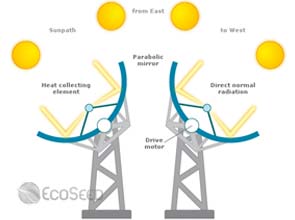 The United States Department of Energy offered a total of $2 billion as conditional commitment for loan guarantees to two solar projects that can double the country’s current installed capacity for concentrating solar power.

The loan guarantees will be awarded to the Mojave solar project by Abengoa Solar Inc. and the Genesis solar project sponsored by NextEra Energy Resources, L.L.C. Each is expected to generate 250 megawatts, translating to a 500-MW total capacity upon completion.

The United States leads the world in terms of C.S.P. installed capacity, taking a 63 percent market share from the global combined installed capacity of 679 MW, according to the Global Concentrated Solar Power Industry Report. Spain follows with a 32 percent operating capacity.

Apart from securing the United States’ C.S.P. leadership, the loan guarantees will help the projects generate almost 2,000 green jobs in California. The Mojave solar project expects to create over 830 construction jobs and 70 operating jobs in San Bernardino County; while the Genesis Solar project foresees about 800 construction jobs and 47 operating jobs in Riverside County, on land managed by the Bureau of Land Management.

California Senator Dianne Feinstein pointed out that the loan guarantee program can drive private investment for large-scale, clean-energy projects, and create hundreds of jobs in the state, thus the need for its immediate finalization.

«The loan guarantee for Abengoa Solar will finance a widely-supported and fully permitted solar plant on private, disturbed lands in San Bernardino County. The loan guarantee to finance NextEra’s project in Riverside County will enable construction of a large-scale solar plant in a county devastated by the economic downturn,” said Ms. Feinstein.

The Energy department’s loan programs has issued loans, loan guarantees or offered conditional commitments for loan guarantees totaling over $32 billion to support 32 renewable energy projects across the United States The program has committed over $10 billion in loan guarantees to solar generation projects, to date.

The $1.2-billion loan guarantee for the Mojave solar project will be Abengoa’s first United States utility-scale deployment of its latest solar collector assembly technology, which improves a previous generation of parabolic trough technology installed in the United States in the 1980s and 1990s.

The new technology features a lighter, stronger frame designed to hold parabolic mirrors that are easier and less expensive to build and install. Its heat collection element uses an advanced receiver tube to increase thermal efficiency by up to 30 percent compared to the United States’ first C.S.P. plants.

The Mojave solar project will have an advanced mirror technology which can improve reflectivity and accuracy. It will operate without fossil fuel back-up systems for generation during low solar resource periods, unlike older C.S.P. plants.

Abengoa is behind some of the world’s major C.S.P. projects as a technology provider and co-developer, as with the 100-megawatt Shams-1 project in Abu Dhabi, and the 250-net MW Solana project in Denver. The Solana project is also supported by a loan guarantee from the department, granted in July 2010.

Meanwhile, NextEra will use its $681.6-million loan guarantee to develop the Genesis solar project’s proven and scalable parabolic trough solar thermal technology that has been used commercially for over two decades.

Both the Mojave and Genesis solar projects will sell the power produced to Pacific Gas and Electric Company.

Over 670,000 metric tons of carbon emissions will be eliminated by the projects every year, while powering more than 101,000 homes.