Consortiums led by Areva, BP Solar to get $815 million in Australia’s solar funding 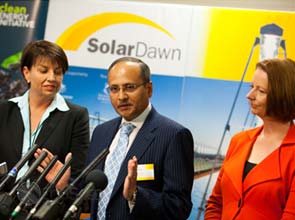 Consortiums led by BP Solar and French nuclear giant Areva won 770.5 million Australian dollars ($815 million) in the first funding round of the country’s 1.5 billion dollar “Solar Flagships” program. Australia could become the country with two of the largest solar power stations in the world if the projects the program will fund get completed.

Moree will receive 306.5 million dollars from the program and 120 million from the New South Wales state government.

The Moree consortium said the solar farm will be the first of its kind in Australia and BP Solar’s largest commitment to date. It can generate enough power for around 45,000 households and prevent around 400,000 tons of carbon dioxide emissions from reaching the atmosphere.

Subject to final approvals, construction on the Moree Solar Farm is scheduled to start in mid-2012. The government said the solar plant is nearly twice the size of any PV power plant operating in the world today.

Areva said the Chinchilla project is designed as a solar thermal gas hybrid power plant. Also said to become the largest of its kind, it uses modular flat mirrors that focus the sun’s heat onto receivers to heat boiler tubes through which water flows.

The concentrated sunlight boils water in the tubes, generating high-pressure, superheated steam which powers a steam turbine generator. A gas boiler acts as a power backup system to extend electricity generation even when the sun isn’t shining.

The federal government said at least 85 percent of Solar Dawn’s power generation will be entirely emissions free. Pending permits, the project will start construction next year, with completion eyed for 2015.

The Australian government announced the 1.5 billion dollar Solar Flagships program in 2009 to support the construction of up to four large-scale, grid-connected solar power stations in the country using solar thermal and PV technologies. It is part of the government’s 5-billion-dollar Clean Energy Initiative, which was announced in May 2009.

The Ministry for Resources and Energy opened the first round of the Solar Flagships program on December 11, 2009, open only to commercially proven solar technologies with at least 30 MW of capacity.

The Department of Resources, Energy, and Tourism said a second round of funding under the Flagships program for newly emerging technologies will be opened after a review of the outcome of the first round concludes.