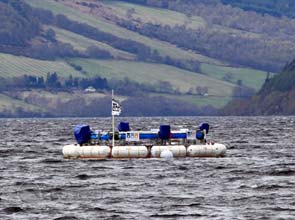 Alstom will join existing AWS Ocean Energy shareholders, including Shell Technology Ventures Fund 1 which is managed by Kenda Capital and Scottish Enterprise, a sponsored non-departmental investment arm of the Scottish government, and the Scottish Investment Bank.

ASW’s main wave power offering, the Archimedes Wave Swing-III, is a ring-shaped, surface-floating device. The rise and fall of ocean waves it harnesses generates air that moves forward and backward through built-in turbines. The turbines activate generators attached to them to produce electricity.

A single utility-scale unit of Archimedes could reportedly generate up to 2.5 megawatts of power.

“Having reviewed many different technologies, and undertaken further detailed analysis with the most promising, we are absolutely confident that AWS‐III is a technology that perfectly complements our existing ocean activities: tidal energy and offshore wind,” Mr. Cochet said.

Compared with wave energy, which relies on ocean surface waves, tidal energy converts the energy generated by the rise and fall of the tides into electricity.

Including devices that can harness salinity and ocean temperature differences into power, the technologies are collectively known as marine energy or ocean power.

A small-scale prototype of the AWS-III was tested last year at Loch Ness. AWS aims to deploy its first demonstration plant by 2013.

Alstom, with investments scattered across many different low-carbon energy categories such as solar, wind and carbon capture and storage, accounts for 25 percent of installed hydropower capacity in the world, it says. Its Alstom Ocean unit was founded in 2009 through a technology-licensing contract with Canadian company Clean Current.

Based in the French island of Nantes, the unit developed Alstom’s first tidal turbine generator, called Beluga 9. It is designed to harness powerful currents to generate 1 MW of electricity.

AWS Ocean Energy said the deal will help it finance its plans to expand its operations and speed up development of a full-scale prototype.

«Alstom’s investment provides us with the stability we need in order to attract top talent to work for us and so today we are launching a recruitment campaign to expand our engineering team at Inverness,» he said in a statement.

«With Alstom as a major backer, AWS Ocean Energy has a delivery capability which our utility customers will need in order to realize their major wave energy projects in Scotland and elsewhere,» he added.

The Scottish government estimated last year that waters surrounding the country have the potential to generate 15 gigawatts of electricity from wave energy and 22 GW from tidal energy, or almost 40 percent of the total capacity found in Britain.

In 2009, 27.4 percent of electricity demand in Scotland came from renewable sources, principally onshore wind and hydropower. For now, the country only has 800 kilowatts of wave energy projects and 250 kW of tidal facilities installed.

“It is a strong vote of confidence in the innovation and engineering capabilities of AWS and their partners and underlines the growing strength of Scotland’s renewables industry as we look to harness our unrivalled wave, tidal and wind sources,” Scotland’s first minister Alex Salmond said.

In July last year, AWS secured £1.39 million (now $2.2 million) in funding through the Scottish government’s WATERS initiative, following investments from Shell and Scottish Enterprise earlier that year worth £2 million. The company was also awarded a £350,000 grant from the British government-sponsored Technology Strategy Board.