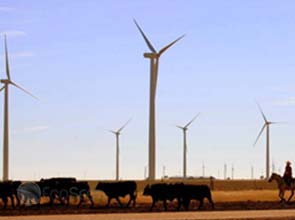 The United States Department of Energy issued a conditional commitment of $135.76 million in loan guarantees to Granite Reliable Power, L.L.C. for a 99-megawatt wind project in New Hampshire, which is estimated to involve a total investment of approximately $250 million.

The Granite Reliable Power Windpark will be the largest wind project in the state, and is the only New Hampshire renewable energy project granted a loan commitment under the department’s stimulus-funded Energy Policy Act Section 1705 loan guarantee program.

The wind farm will be constructed in the central portion of Coos County, in northern New Hampshire. Despite being the state’s largest county, Coos County has a small and declining population, which is attributed to the county’s weak economy, said a study from the University of Hampshire on the economic impact of the wind farm.

The study states that estimates for economically developable wind in New Hampshire range from 500 to 2,200 MW. The state’s capacity of 25 MW is well below its economically achievable potential, the study points out.

The study projects that the wind farm can generate a total income of $122 million for the local community within 20 years. Almost 200 green jobs can be generated once construction commences.

«This administration is creating clean energy jobs, in New Hampshire and in countless states across the country, which will help the U.S. to recapture the lead when it comes to the deployment of renewable energy,» said Energy Secretary Steven Chu, who announced the loan commitment.

Meanwhile, Connecticut-based developer Noble Environmental Power will install 33 Vestas V90 3-MW wind turbines for the wind farm. Although the turbines are already in commercial use internationally, the Granite Reliable Power Windpark will be only the second United States wind project to deploy the turbines.

Majority of the power generated will be sold to Central Vermont Public Service and Green Mountain Power.

The project can provide enough electricity to power almost 20,000 homes while reducing over 124,000 metric tons of carbon dioxide emissions every year.

The D.O.E. Loan Programs Office is one of the largest energy project finance operations in the world, committing nearly $31 billion to support 29 clean energy projects and creating over 62,000 jobs across 21 states. The L.P.O.’s Section 1705 loan guarantee program is set to expire on September 30.