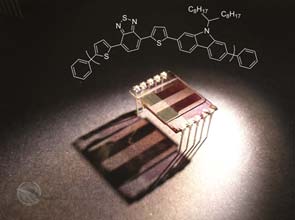 Researchers from the Universities of Sheffield and Cambridge found a simple and inexpensive method to create plastic or polymer solar cells that makes use of the cling-film plastic concept.

The researchers found that when complex mixtures of molecules in a solution are spread onto a surface, the different molecules separate to the top and bottom of the layer in such a way that they maximize the efficiency of the solar cell produced.

The material they used is called PCDTBT:PCBM, a material based on the Nobel-prize winning work of Professor Richard Smalley and Professor Harry Kroto on the buckyball form of carbon.

The solution, which is essentially a plastic film, can be applied through a low-cost, roll to roll printing technique – a process similar to that of printing newspapers.

“Rather than using complex and expensive fabrication methods to create a specific semiconductor nanostructure, high volume printing could be used to produce nano-scale films of solar cells that are over a thousand times thinner than the width of a human hair,” said Andrew Parnell of the University of Sheffield.

“These films could then be used to make cost-effective, light and easily transportable plastic solar cell devices such as solar panels,” he added.

Currently, the polymer solar cells have an efficiency of 7 to 8 percent. However, the researchers pointed out that to increase its usage or to make it commercially appealing they would have to improve its efficiency to 10 percent.

The bright x-rays by Diamond Light Source, U.K.’s national synchrotron facility, were specifically used to study the crystallinity of the material, while neutrons at Isis, a center for research in the physical and life sciences, were used to examine the material’s composition profile.

“By studying the layers in the materials which convert sunlight into electricity, we are learning how different processing steps change the overall efficiency and affect the overall polymer solar cell performance,” explained Robert Dalgliesh, one of the Isis scientists involved in the research.

A grant given by the Engineering and Physical Sciences Research Council funded the research. Additional funding was given to further the study regarding the structure and function of polymer solar cell materials, as well as examining new materials and innovative processes for high volume manufacturing and for future commercialization. (L.J. Polintan)