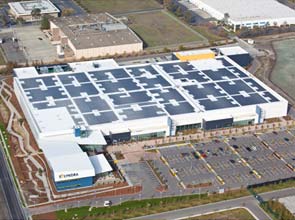 The United States House of Representatives is set to investigate the collapse of a solar startup which obtained a hefty amount of funding from the government, to identify possible misrepresentation on the part of the company or if state officials overlooked details that could have determined whether the firm had the capability to pay back its debts or not.

«As the highly celebrated first stimulus loan guarantee awarded by the [Department of Energy], the $535-million loan for Solyndra was suspect from day one,» Mr. Upton said.

«Our investigation to protect American taxpayers has revealed that in the rush to get stimulus cash out the door, despite repeated claims by the [Obama] administration to the contrary, some bets were bad from the beginning,» Mr. Upton added.

«Our investigation continues, and with Solyndra’s bankruptcy we expect full and continued cooperation from the [Office of Management and Budget], as we must ensure American taxpayers are not left holding the bag,» he said.

The committee has been checking up on Solyndra since the energy department awarded a $535-million loan guarantee to the company in September 2009 to inquire about the company’s financial health, to which Solyndra executives, lobbyists and investors have been responding in the affirmative, Mr. Upton said.

The loan guarantee was intended for the construction of a commercial-scale solar panel manufacturing plant which was expected to generate 3,000 jobs.

The committee started an inquiry into the energy department’s Recovery and Reinvestment Act of 2009 spending last February. The move was followed by the subcommittee on oversight’s public hearing on the department’s use of stimulus funds last March 17.

Last June 24, the oversight subcommittee initiated moves to determine how much influence the management and budget office has on the energy department’s loan guarantee process.

The energy and commerce committee issued a subpoena last July 15 to the management and budget office for the submission of documents related to approving the credit subsidy costs of all D.O.E. guarantees.

Since closing the D.O.E. loan guarantee, Solyndra has suffered financial setbacks, including the cancellation of a planned initial public offering in June 2010, factory closures, laying off of workers totaling 1,100 and postponement of a plant expansion.

Under the government’s loan guarantee program, the government will not provide an actual loan to a company but will repay the commercial loans the company receives in case of a default.