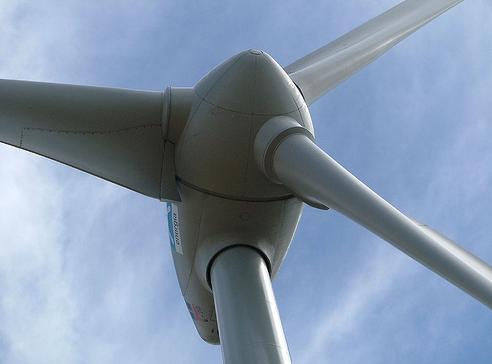 The worlds first 6-megawatt offshore wind turbine, the most powerful of its kind at present, has been installed in the Belgian offshore wind farm Thornton Bank.

The system of manufacturer Repower Systems has a rated capacity of 6.15 MW. Thirty of these turbines will be installed by September, with the installation of the last 18 turbines set for 2013.

The turbine’s nacelle has the size of a two-family house. The rotor has a diameter of 126 meters – sweeping the surface area of two football pitches.

A single turbine can supply the equivalent of 6,000 residential households with electricity per year.

The first 18 rotor blades with a length of 63 meters each reached the base port at Ostend in mid-March. They were delivered from Denmark with heavy goods vehicles by road. The nacelles and tower segments are transported on pontoons by sea from Bremerhaven.

«The installation of the first 6-MW turbine in a commercial offshore wind farm is an important milestone for the entire offshore wind industry,» said Prof. Martin Skiba, head of offshore wind power at RWE Innogy.

«It marks another step along the road towards larger offshore wind power plants with ever more powerful machines. The experience we are gathering with the construction of these plants is of great value to us because we are also going to use this turbine in our German offshore wind farm Nordsee Ost,» Mr. Skiba said.

The 325-megawatt Thornton Bank wind farm, said to be worth approximately 1.3 billion euros ($1.711 billion), currently has 30 MW worth of capacity from its first phase which began operations in 2009.

The second and third phase of the project will consist of 48 turbines.

A 40-kilometer-long export cable to connect the new installations with an onshore grid connection point at Sas Slijkens is scheduled to begin installation in the next weeks.

Thornton Bank is said to be Europe’s largest project-funded offshore wind farm, with a total of eight European banks, including the European Investment Bank and the German and Danish Export Credit Agency, providing 900 million euros’ worth of financing and risk sharing for the project.