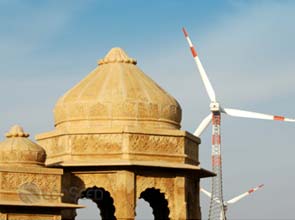 A new assessment of wind energy in India by the United States Lawrence Berkeley National Laboratory found that the potential for onshore wind energy generation in the country is higher than official estimates.

A new assessment of wind energy in India by the United States Lawrence Berkeley National Laboratory found that the potential for onshore wind energy generation in the country is higher than official estimates – or from 20 to 30 times greater than the current government estimate of 102 gigawatts.

The study found that India’s total wind power potential can range from 2,006 GW for turbines at 80-meter hub heights (an indication of how high the wind turbine stands above the ground), to 3,121 GW for 120-meter hub heights.

Ranjit Bharvirkar, a senior consultant at Itron Inc. and one of the authors of the study, said part of the motivation for reassessing India’s wind potential came from recent reassessments of the wind resources of the United States and China.

Both found substantial increases over the previous assessments – a tenfold jump in China and a 50 percent increase in capacity in the United States.

Improved wind technology, including higher efficiency and hub heights, accounted for much of the increase, along with more advanced mapping techniques.

The Lawrence Berkeley study found that India’s estimate of 102 GW is based on the assumption that only 2 percent of the windy land is available for wind power development.

However, this assumption is not based on any assessment of land availability.

The Berkeley Lab study undertook a systematic assessment of the availability of land using publicly available geographic information system data on topography and land use and found a significantly higher availability of land that can potentially be used for wind power development.

«Wind is one of the most cost-effective and mature renewable energy sources commercially available in India, with an installed capacity of 15 GW and rising rapidly,» says Berkeley Lab scientist Amol Phadke, lead author of the report.

«The cost of wind power is now comparable to that from imported coal and natural gas-based plants, and wind can play a significant role in cost effectively addressing energy security and environmental concerns.» – EcoSeed Staff